High school students beautify bathrooms while learning to give back 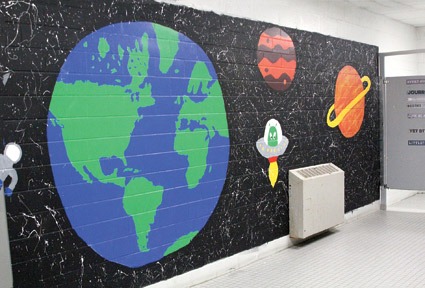 LONGMEADOW – The bathrooms at Wolf Swamp Road School in Longmeadow are out of this world thanks to six Longmeadow High School (LHS) students.

The class involves groups of students working on projects in the community while assessing the progress and reflecting on the experience.

Ditmar attended Wolf Swamp Road School (WSRS) and said, “I wanted to go back and do something there.”

Ditmar noted that it was WSRS Principal Dr. Elizabeth Nelson’s idea to paint the bathrooms after seeing something similar at East Longmeadow High School. Piper said that it was a good project for the six students to work on since most of them “are artistic.”

“We weren’t afraid to take on the job,” Ditmar said, though she admitted that it was more work than they had realized at first. There were also some snags in their project, such as when, after they had sketched out the designs on the walls, a janitor who thought it was graffiti erased their work.

The students worked from October to the beginning of January on the project.

“We wanted a theme that was not gender-binary,” which is why they chose a space theme, Piper said. Blanchette added, “We wanted both murals to be the same, so it was equal.”

The team collectively planned out the designs, Blanchette said, and drew much of the art freehand. The students wanted to hand-paint the messages, but because of the time limitations, they chose to use sticker decals, instead. Slogans such as “Believe in yourself,” and “Every great journey begins with one single yet brave little step,” now adorn the walls and stall doors.

“It’s nice that we have the time to work at other schools,” said Megan Schwartz, who taught the Community Service Learning class in the fall semester. She said different faculty teach the class, depending on the semester, which provides a different focus. Schwartz had 22 students enrolled in the class in the fall.

Two other groups also went to WSRS, one to work with kids on emotional issues and another group to work with autistic children in the preschool. The other groups in the class took on various community projects, including a group of boys who took on the moniker “the Zoo Crew,” and cleaned the trails at the Zoo at Forest Park. Groups also worked on gardening projects and with autistic students at the high school.

“It’s a class that everyone should take. We should all work to be kind,” Piper said.