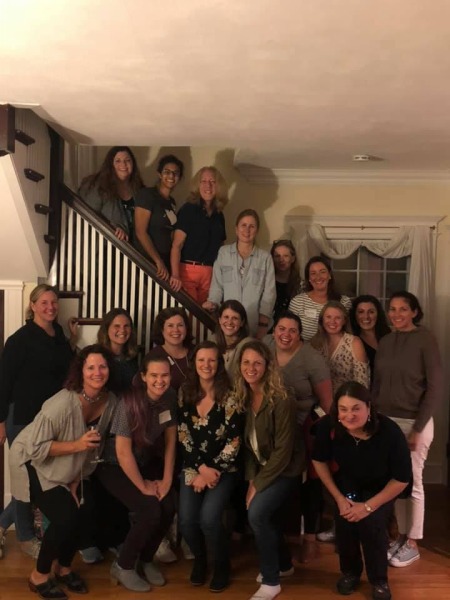 LONGMEADOW – This fall, the Longmeadow Newcomers Club is starting off their year with an Open House event from Sept. 24 to 27.

Traditionally, President/Membership Chair Sara Manzel said the event takes place at her house for women (stay at home mothers, working mothers, single women, women with no children and older women whose children are grown) interested in becoming members and seeing what the club is about. Given COVID-19, Manzel is modifying her approach with a mix of in-person and online events to keep current and new members connected.

The first day of the open house (Sept. 24) will be via Zoom at 7 p.m., followed with in person sessions available that weekend. From Sept. 25 to 27, the club will have small groups meet together in the backyard of one of their leadership members’ houses with masks and social distancing requirements. They will also be refraining from providing homemade food and instead offering individually pre-packaged snacks and beverages.

“The purpose of the club is to give women a chance to make friendships and have a source for information and recommendations as well as a social outlet,” Manzel said.

She went on to say, “It’s a great resource as you come into a new town, a relatively small town. Getting yourself acclimated and understanding what’s around, places to go and things you should be doing. As well as feeling like you’re talking to people that are in a similar situation and figure out things together.”

Founded in 1963, the Longmeadow Newcomers Club began with a group of women bonding over the experience of being new in the area.

Manzel lived in Richmond, Virginia and moved to Longmeadow in August of 2018. “This was the first big move I’ve ever made,” she said. “It was overwhelming to come to a new place and feel like I had no outlet to have friends or meet new people.”

Mansel was browsing online and stumbled upon the club’s website. She went to their open house event and became a member in September of 2018.

The club runs from September to May with, 100 members who communicate regularly.

They host events throughout the year, including monthly Bunco games, a cookbook club, a book club, and an exciting variety of social gatherings.

To become a member, the club asks for an annual fee of $40 to cover food, drinks, special event goodies and their end of the year soiree.

They also do community service, working with a local soup kitchen called Loaves and Fishes providing meals and baking brownies once a month for the homeless.

The club also sponsors the Teen Parenting program in Springfield assisting young mothers in learning and establishing life skills to support their families and themselves.

Leadership board member Kristin Mentuck lived in New York before relocating to Longmeadow in November of 2018. Once she moved to the town, Mentuck received an open house flyer for Longmeadow Newcomers in the mail.  At first Mentuck said she was skeptical about the group, but decided to go anyway. After attending the open house, Mentuck stated, “I knew then that I wanted to join. In the end, it was a great decision for me since I got to meet a lot of new ladies in the area that I might not have come across otherwise.” She went on to say, “This club has made me into a more active person in the community.”

Member Carol Martucci is this year’s Bunco chairperson and was president of Newcomers two years prior. When she moved to Longmeadow four years ago, Martucci received a postcard in the mail inviting her to an open house. “I was a little apprehensive,” Martucci responded. “Then I went and the people I met were really nice. I’m a pretty outgoing extroverted person, but it still took me a little while to go to more of the events.” It was during her second year at the club Martucci started going to more events and spending time with the other women.

That same year, Martucci said the club was looking for someone to run some of the social events and she volunteered.  “I think being involved in leadership made me more involved in the club in general,” Martucci replied. “I’ve met so many great people and I have very close friends that live a couple of streets over.

“I’m so excited that I have those friends through the club and throughout Longmeadow. It’s a hidden benefit of living in this town,” Martucci added.

Manzel stated in this sentiment, “It has really made me feel like Longmeadow is my home and I’m not sure I would have felt that way without the club.”

For more information on the club or becoming a member, please join one of their virtual or in person open house sessions. The club asks that people reach out to them through their email, Longmeadownewcomers@yahoo.com and Facebook page for additional details on times and locations of the event to ensure control of group size and safety.