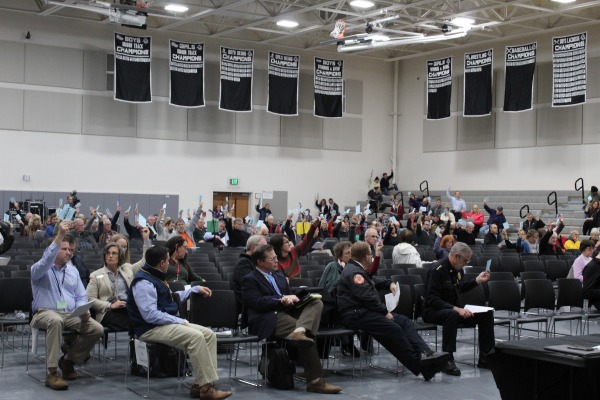 Residents raised their cards to vote on a warrant article at the Nov. 5 Longmeadow Town Meeting.
Reminder Publishing photo by Dennis Hackett

Article one proposed to appropriate $139,560, or 10 percent of the estimated annual Community Preservation Act revenue for open space, community housing and historic preservation. The first article passed with little debate from either side.

Article two was to raise and appropriate $15,000 to conduct a pavement distress survey to look into road conditions in the town and recommend action based on the survey results. The motion failed with 89 no votes to 81 yes votes.

Article three proposed to increase the Fire Department’s salary budget by $45,000 to fill the vacancies for two retirements to ensure a smooth transition, but they would not be permanent full time employees. As soon as the motion went to a vote, residents quickly raised their blue voter cards in a resounding yes to the motion.

Article four proposed to appropriate $390,000 to the maturing principal on long term debt and $227,506 to the interest on long term debt to cover the debt costs for the new Council on Aging Facility. With little discussion, residents voted in a near unanimous affirmative vote.

Article five was a motion to appropriate $100.79 to finishing paying the bills from the past fiscal year. The motion had to pass with a nine tenths majority affirmative vote, and passed with the exception of one voter.

Article 24, a citizen petition was a motion to use $15,000 to begin studying the design, layout and potential location for an outdoor skate park designed for skate boarding, cycling, scootering or rollerblading. As part of the petition, three third graders came up to the podium to discuss why having a skate park in town was important to them. One of the kids thought it would be motivation for more kids to play outside. “Parents used to have to drag their kids inside because they were playing in the neighborhood too long. Now parents have to drag their kids outside because they are on technology too long.” Residents voted against the motion.

Article six proposed to appropriate $1,265,000 from the premium paid to the town on the sale of bonds back on Oct. 30 to pay for the LED streetlights project, the landfill capping project, the Council on Aging facility and the Morningside Drive Culvert project. Voters approved the motion with an affirmative majority vote.

Article seven was a proposal to transfer $175,000 from the town Treasury to cover the cleanup costs of the July 6 microburst. The motion passed with a unanimous affirmative vote.

Article eight was to transfer $125,700 from the treasury to cover the costs of Phase I of the project to cap the Birnie Road/Tina Lane Landfill. This motion was to help limit any environmental caused by capping the landfill as well as to meet DEP deadlines set for capping the landfill. The motion passed with a majority affirmative vote.

Article nine proposed a transfer of $125,000 from the treasury to the FY 2020 Operating Budget for Legal Expenses to protect the town’s interest dealing with the distribution of natural gas and other legal matters, including the ones regarding the new DPW facility. During the discussion of this motion Longmeadow Select Board Chair Marie Angelides confirmed that the town was facing an ongoing lawsuit from the former owner of the property on Dwight Road. After some debate the motion passed with an affirmative majority vote.

Article 10 was a request to transfer $45,000 to provide the town’s share of a Municipal Vulnerability Program Grant. The purpose of the grant is to prevent further erosion and tree damage in Longmeadow while also providing an analysis of the drainage system at the Dwight Road property. The motion passed with a majority affirmative vote.

Article 11 proposed to transfer $140,000 from the Treasury to supplement the Operating Budget for the DPW Forestry account. The article also stated that nearly two thirds of the Forestry budget had already been spent for FY 2020. The voters passed the motion with an affirmative majority vote.

Article 12 was to transfer $25,000 to the DPW’s planting account to plant 146 trees this fall ad in order to have additional money for planting in the spring. Residents voted in a majority affirmative vote to pass the motion.

Article 13 was a motion to transfer $102,018 to the Operating Stabilization Fund due to the fact that the Select Board requires that all free cash that exceeds $500,000 in the Town’s budget be transferred once the account is balanced and any related financial issues are covered. The article states this motion would help with future credit rating opinions for the town. Voters passed the motion with a majority affirmative vote.

Article 14 was a motion to appropriate $1,300,000 to pay additional costs for constructing a new DPW facility after asbestos was discovered early on during the construction at the site. One of the proponents of the funding, Marybeth Bergeron, the chair of the Permanent Town Building committee said, “I am as upset as anybody in this room but there really is no choice, what are we gonna do?”

Both sides debated the pros and cons of the motion for nearly an hour. After the vote went to a count to determine if they reached a two thirds majority approval, it was narrowly passed at a 111 to 45 vote.

Article 15 was a proposal to authorize the treasurer to borrow $2,000,000 to complete Phase II of capping the Birnie Road/Tina Lane Landfill. As with article eight, article 15 was also meant to limit any environmental damage and passed with a two thirds majority affirmative vote.

Article 16 proposed to transfer $236,000 to replace the Water Mains on Fairview Street. The replacement would include new valves, service lines, and hydrants to provide better water quality and more capacity for fire protection. The motion passed with a majority affirmative vote.

Both articles 17 and 18 were motions to appropriate money from the CPA account to improve irrigation and renovate fields throughout the town but did not go through the proper procedure , so they were changed to a no motion vote, which residents approved.

Article 19 was a motion to revoke article 36 from this year’s spring Town Meeting on May 14, 2019. That motion created a four member Board of Election Commissioners but gave them new responsibilities the article said they could not handle on their part time status. Residents voted an affirmative majority vote.

Article 20 was a motion to open the polls on Election Day an hour earlier, at 7 a.m., to allow residents who normally could not vote on the way to work to stop by the polls. The motion also would make the town’s voting hours more consistent with State and Federal elections. Voters passed the motion with an affirmative yes vote.

Article 21 proposed to change the phrasing the Water and Sewer Water Service General bylaws Section 2-601 (f) to add the phrase “by fees based on connection and measured usage,” the article said. This change would allow the water billing system to match the town’s current sewer billing system. During the discussion of the article, Longmeadow Select Board member Mark Gold gave a presentation discussing the reasoning for the change and the Water Department’s current budget. Residents passed the motion with a majority affirmative vote.

Article 23 was a citizen petition to build to transfer $110,000 from the treasury to construct a sidewalk along the east side Knollwood Drive at the intersection of Knollwood Circle. The motion was meant to provide a safer commute for students walking to school.

While the motion was met with backlash from the finance committee, the select board, and many of the town officials at the meeting, the residents held their ground to talk about why they thought the sidewalk was important, citing that this project did not follow the proper procedures to get approved.

The resident who brought forward the motion said, “This is not about the money it’s about the safety of our children. Without a sidewalk we are just waiting for an accident, and when this accident happens it will be too late.”

Despite any dismay from the town officials, voters elected to pass the affirmative majority vote.

article 23 did follow all the correct procedures that anyone can find and follow on the town website.  That is why it was allowed on the warrant.  That is a very skewed writeup and very negative

Kudos to Longmeadow for banning styrofoam and plastic straws