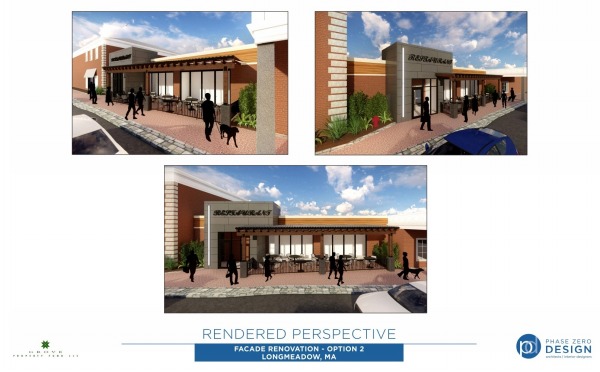 A rendering of the new design for the exterior of 674 Bliss Rd. This will be home to Posto, an Italian restaurant which is scheduled to open in May 2019.
Reminder Publishing submitted photo

LONGMEADOW – Co–owners of Agawam’s The Federal and West Hartford’s Vinted Wine Bar, Ralph Santaniello and Michael Presnal are no strangers to owning and operating successful restaurants. Their latest restaurant venture has a predicted opening date of May 2019 in the Longmeadow Shops, and promises to be the place to be.

“I come from a family of restaurant people,” Santaniello explained to Reminder Publishing. Santaniello’s parents opened Amedeo’s in Holyoke in 1985 when he was 9 years old. He and his sister, Cristina Presnal, grew up working in the restaurant for their parents.

Santaniello’s co–owner is not only his business partner, but also his brother in law. He explained that Presnal is the executive chef and also has a background in restaurants. Following his graduation from culinary school, Presnal worked for a series of restaurants. He then launched and owned popular Martha’s Vineyard restaurant, Alchemy, until Presnal made the decision to sell his share when he and Santaniello opened The Federal.

“Somewhere around 1998 I decided I wanted to do this as a career and I didn’t want to take over my parents restaurant – I wanted to get into fine dining,” Santaniello shared. Amedeo’s is still in Holyoke, but has been under new ownership since 2003. “I lived on the Vineyard for a couple of summers and helped him [Presnal] launch Alchemy. We decided we were going to partner up. He and my sister were getting married and he wanted to move home. He’s like a big brother to me.”

Santaniello continued, noting that in 2002 the pair opened The Federal and have celebrated the successful business for 16 years. In 2012, they then opened Vinted Wine Bar, which was reviewed, “excellent” by the New York Times.

In April of this year Bertucci’s closed in the Longmeadow Shops plaza after 20 years of business in the location. Since then, 674 Bliss Rd. has sat vacant, waiting for a new business to bring it back to life.

“You know, it’s funny. We’ve done a lot of things in the last 16 years – some successful, others didn’t work out for whatever reason, and we just honestly weren’t looking for anything,” Santaniello reflected, explaining he and Presnal were not looking specifically to open another restaurant this year. “We always have our radar on and open to the discussion, and Steve Walker [owner of the Longmeadow Shops] reached out to us.

“We had talked years ago about doing something [similar to their proposed new restaurant] but it wasn’t the right town. We had some ideas of what we would want to put there [at the Longmeadow Shops] and it fell perfectly to what they’re looking for. We had a concept we really loved, it’s close by where we live, we’re familiar with the market, we live here. It was sort of a perfect fit,” the East Longmeadow resident noted.

Walker explained why he reached out to Santaniello specifically to fill the former Bertucci’s site, “One of my goals was, I live out in Belchertown. I want a restaurant so when I drive home on Friday and ask my wife and kids, ‘Where do you want to eat?’ I’m driving back to Longmeadow to go to this restaurant. That was one of the keys, and I know that that’s going to be the case. We do it for Max Burger. I’ve been here for five days already, and it’s Saturday, you know, ‘Where do you want to go?’ And it’s back to Max Burger. I was looking for a restaurant that would draw from 30 minutes away.”

Santaniello is Italian, and both of his parents are from Italy. “Posto” in Italian translates to “place.”

“That’s what my Grandma used to call our family restaurant; just ‘the place’–the posto,” he said.

Posto will be home to house–made pasta, neapolitan–style pizza, a homemade mozzarella bar and more.

Walker added, “If you go down to West Hartford or Glastonbury, those communities have so many options, and they’re good restaurants. In Western Massachusetts, you know, there may be some restaurants but there’s not, in my opinion, the caliber of restaurants that this is going to be.”

As for the atmosphere, Santaniello promises Posto will be fancy enough for date night, but casual enough to bring the kids after a soccer game.

“We’re still building it, working with designers and stuff like that, but what we have in mind is a refined rustic. It’s certainly going to be approachable – not a white tablecloth, fine dining like at The Federal, but it’s going to be a mix between what we do at the Federal and at Vinted,” he explained.

As for the exterior, Walker and Pevay explained the storefront will be receiving a makeover. The outside of the building has looked the same since Prestley Blake developed the space for a French restaurant years ago. In an effort to keep up with the times and update the space, the front wall is going to be opened up and outdoor dining will be offered for customers looking to enjoy the outdoors with their lunches and dinners.

“You can see it’s pretty dark in here now,” Walker referenced the inside of the current, untouched restaurant. “That’s going to totally change when we put in the windows and doors.”

Pevay added that the gazebo which currently graces the outside of the building will be removed. She and Walker stated they would be open to hearing from anyone in the community who may want to purchase the gazebo prior to its removal.

With Posto moving into 674 Bliss St. at the Shops, only one vacant retail space in the Longmeadow Shops remains: a portion of the former CVS. Talbot’s occupies 80 percent of the space that was once the pharmacy, and now 20 percent is left and up for grabs for a new business to take over.

“It’s going to be an exciting spring and summer,” Pevay stated.

Construction on the inside of the location will begin on Dec. 17. Inglewood Development of Longmeadow will be completing the renovations.

Great news! He's absolutely right this area needs new dining options, most are dated and stale, wish them success. Hope to seem more competition from people with his sentiment help bring our area out of the dark ages.