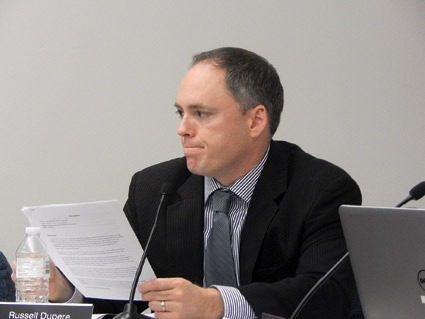 School Committee member Russell Dupere made a motion to offer Iowa-based superintendent search firm Ray & Associates less money than was agreed upon by the two parties due to unsatisfactory work by the search firm in the process to find a new superintendent.
Reminder Publications photo by Chris Goudreau

LONGMEADOW – The School Committee is dissatisfied with the work of superintendent search firm Ray & Associates and voted unanimously at its Jan. 25 meeting to offer less money for the firm’s services than what was initially agreed upon.

School Committee member Russell Dupere made the motion to pay the Iowa-based superintendent search firm the minimum amount of $17,000 and candidate travel expenses minus one semi-finalist candidate who did not have the proper qualifications to become superintendent.

Ray & Associates was hired unanimously during the School Committee’s Aug. 31, 2015 meeting for an estimated price of $25,900.

“The first round was supposed to be 10 to 12 candidates,” School Committee member Kimberly King said. “They brought us nine.”

School Committee Chair Janet Robinson said the search firm initially brought the 10 candidates forward to be vetted by the Preliminary Superintendent Search Subcommittee, but one candidate accepted another position prior to their interview.

King said the candidate who was not qualified for the position was among the nine candidates brought forward by Ray & Associates.

The motion also included not paying Ray & Associates for its travel expenses or any additional expenses.

Dupere said he spoke to some of the references of superintendent candidates who told him they never spoke to representatives of the search firm. One of Ray & Associate’s duties outlined in the contract was to speak with references.

Robinson said the search firm has a log of its employees who contacted references, which the School Committee is requesting to review.

In other business, Superintendent of Schools Marie Doyle said a presentation on funding free full-day kindergarten in the fiscal year 2017 (FY17) budget is set to take place during the committee’s Feb. 1 meeting.

The School Committee also unanimously agreed to increase the student busing fee from $225 in FY16 to $235 in this upcoming fiscal year.

Mazza said within the past year the district has gained $30,000 in revenue through the fee.

King said the overall cost for transportation within the past year was $239,382.

The Preliminary Superintendent Search Subcommittee completed a re-do of two meetings that were not posted for Dec. 2 and 12, 2015 at its Jan. 22 meeting. The subcommittee recommended the same candidates as it did previously, which included O’Shea, Wolf Swamp Elementary School Principal Neil Gile and Evansville Vanderburgh School Corporation of Indiana Associate Superintendent for Strategy and Accountability Catherine Minihan.

Minihan dropped out of the running prior to finalist interviews due to personal reasons.

The School Committee voted 5 to 2 in favor of hiring O’Shea once again. Grodsky and Dupere voted against the motion, citing their support for Gile. Both stated they agree with O’Shea becoming superintendent. School Committee Vice Chair Michael Clark participated remotely in the vote.

Dupere then made a motion to make the hiring of O’Shea unanimously, which was made a reality.

Robinson said the district is still in contract negotiations with O’Shea.