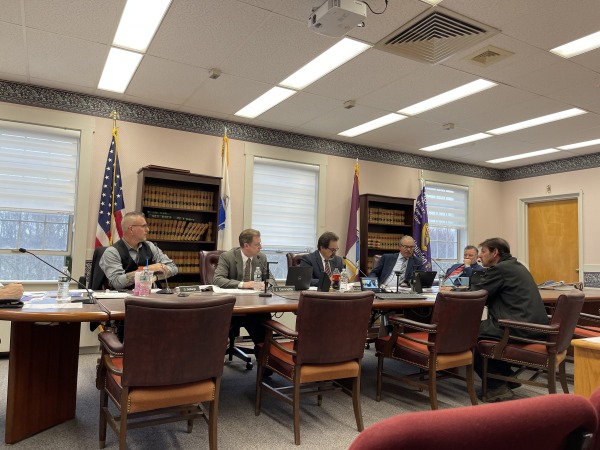 The Ludlow Board of Selectmen meets with Board of Public Works Chair Stephen Santos during its May 3 meeting.
Reminder Publishing photo by Dennis Hackett

LUDLOW – Following a lengthy discussion during its April 26 meeting about increases to the trash collection contract for fiscal year 2023 (FY23) the Ludlow Board of Selectmen met with representatives from the Department of Public Works (DPW) to decide on the best step forward.

To begin the conversation, Town Accountant Kim Collins said there was additional money in the levy because of a discrepancy on the town insurance increase.

“There were some adjustments made to the insurance numbers, they’re actually closer to where they were prior to last meeting so the total budget is sitting at $77,196,821 and that leaves you with a little over $180,000 in excess levy in order to manage the trash issue,” she said.

New DPW Director Jesse English said he was able to negotiate on the two bids the town received and lower the cost for one of them.

“I have been working with Waste Management and Republic to reduce some of the costs. I ended up getting the collection fees from Waste Management reduced by $110,760 for the first year and then by the end of the three-year contract it would be down $349,171,” he said.

While the board discussed changing to automated trash pickup for the upcoming year, English said they negotiated numbers with Waste Management for continued manual pickup because they were not willing to bring the upfront price down.

Board of Public Works Chair Stephen Santos said the problem with shifting to automated pickup is the cost of the bins. With the current proposal for two 35-gallon bins, one for recycling and one for trash along with a 65-gallon bin for cardboard, the cost for the bins is over $1.4 million.

Board Vice Chair James Gennette said the trash collection increase had to be resolved for at least the upcoming fiscal year before the town tries to negotiate the rest of the contract.

“If we get out of this year we can negotiate again for next year and at that point maybe we start talking to them about automation. So, we’re looking at just getting through this year at this point because we’re strapped so we’re really trying to bring it back in, we don’t want to exhaust all our free cash or stabilization to try and get this done, we are trying to make sure we have our trash pickup July 1,” he said.

After FY23, Collins said the problem with the contractual increase will still be present.

“Even if you get into this manual contract for year one, in year two it’s going to go up $388,000, so that is something we are going to have to worry about again next year and then the year after that it will go up $51,000 but that doesn’t include any increases in the other line items including disposal and transport,” she said.

Another challenge with trash disposal Santos brought up is that the DPW recently switched to the transfer station in Wilbraham after the station the town previously used filed for bankruptcy.

“We are paying $90 a ton to get rid of it in Wilbraham; in talking to the owners at Wilbraham, they’ll extend that at $90 a ton for next year, but after that we go out to bid. I have heard rumors of the towns that didn’t sign with F and G [Recycling] it was $130, $145 a ton for disposal, that’s why I get a little nervous when you start throwing too much trash away, instead of $600,000 its going to be $1 million,” he said.

Gennette added the town needed to find a way to account for the increase within the budget and not by using American Rescue Plan Act funds.

“We’ve got to be able to manage this inside our budget; going forward this is something we will have to manage, however it shakes out we have to do the work here, we can’t just use the gift money to fix something long term, so let’s get through this year,” he said.

Board Chair Antonio Goncalves said he was concerned about negotiating the contract after year one.

“I’m just concerned that next year or the year after they are not going to give us the flexibility, we think we’re getting right now and that troubles me. I do business with them – not at this scale obviously – but for a lot of years and they will tell you anything you want to hear to get you to sign because it’s so cutthroat,” he said.

If the board decided to extend the contract with Waste Management for one year, English said the price would be significantly higher.

Board member Manuel Silva said he was against taking money from the levy limit to pay for the trash contract.

Gennette said he would be in favor of using money from the levy because sooner or later it is going to go up.

“I don’t see a way around it; I don’t want to put anything back toward the taxpayers either, but we are up against it with all of the departments. If we don’t do anything this year, it’s going to double up next year and push toward that [Proposition] 2 1/2 override,” he said.

One option down the road is reappropriating funds in the budget at the October Town Meeting, depending on what the town’s revenues look like.

“As we are looking at our revenues, we do have the option at October Town Meeting to adjust the budget amounts. If we get to a point where we see our revenues are higher than expected and we can rely on that as opposed to accessing the levy or free cash, we can always do an article to rescind it and rely on the levy if there is more available,” Collins said.

Santos also suggested that the town might not be able to continue to offer trash collection.

“This might not be sustainable any more for the town to do trash collection, it’s one of those things you look at in three years and decide it may not be the way to go,” he said.

The Ludlow Board of Selectmen next meets on May 17 and coverage of that meeting will appear in the May 26 edition of The Reminder.