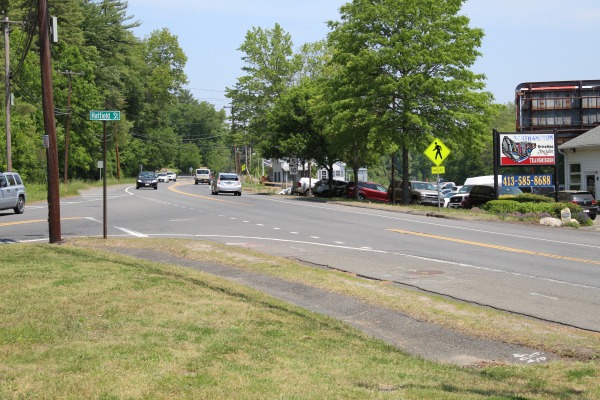 The intersection of North King and Hatfield streets was the location of a controversial roundabout project proposed and now retracted by the Massachusetts Department of Transportation. Reminder Publishing photo by Dennis Hackett

NORTHAMPTON – After years of research, planning, petitions, and public testimony, the Massachusetts Department of Transportation (MassDOT) announced on May 18 the current construction contract for a proposed roundabout at North King Street and Hatfield Street had been terminated while MassDOT reevaluates the project.

In a media release, MassDOT said community feedback at a virtual public information meeting on Feb. 17, 2020 was the motivation for putting the brakes on the project.

“The overwhelming majority of the comments raised opposition to the project due to its impacts to an archaeological site. There has continued to be substantial public opposition towards the project that MassDOT was not able to minimize during the public process,” according to the release. “Therefore, MassDOT has determined that the best next step is to terminate the current construction contract and undertake a re-evaluation of the project design. The re-evaluation option is responsive to the nature of the public comments received, which asked MassDOT to consider alternatives that avoided the location of the archaeological site. This re-evaluation will take public opposition into account as a key evaluation criterion for all design alternatives considered.”

Northampton’s Executive Director of Sustainability and Planning Wayne Feiden said the project was cancelled and the state hired third-party engineers to develop a new design.

“The roundabout is cancelled; the state is going to hire outside engineers who have not been involved to figure out the design solutions. The safety problem that led to this project is still there, so the state is not abandoning it, but the current project is definitely being cancelled,” he said.

Feiden added that the lack of safe biking and walking access to the Big Y on North King Street was the focus of the project.

“This is the only major grocery store in town that does not have safe bicycle and pedestrian access. It is both the city’s policy and the state’s policy that people should feel comfortable walking and biking everywhere. Having a major grocery store on King Street that is not safe to get to from walking and biking is critical and I think that message is lost here,” he said.

Feiden said that he did not know enough about the Native American artifacts on site to comment about the findings.

“We turned the designs over to the state, and they are the ones who did the archaeological work. There are so many different stories of what is out there I just do not know enough about what it is to speak intelligently,” he said.

During a meeting on May 24, the Northampton Historical Commission passed a new resolution under Chapter 106, stating that a project on the site would result in negative impacts to historic properties.

Property owners frustrated with the process

Greg Skibiski, whose family owns land taken by the state for the project, started a petition, and has been fully involved in a civil suit opposing the project since June 2020. He said after a yearlong archaeological survey, one day a construction company showed up to demolish the site for the roundabout.

“It started as a surprise where they did archaeological testing as a part of their standard procedure to look at this roundabout. They were going to take a sliver of land from our property, no big deal. Then without any notice they showed up on the property and started an archaeological dig. One day they were gone and then we got a notice the construction would start July 1,” he said.

Following the notice, Greg’s father, John Skibiski, who owned the land taken by eminent domain, said he sent a letter to the editor of the Daily Hampshire Gazette stating that Native American artifacts from 8,000 to 10,000 years ago were on the site and only the archaeological team knew what was buried there.

Greg said that one of his biggest frustrations was that Northampton’s government did not get involved in the public discussion about the dig and the roundabout.

“From the very beginning we have been frustrated. The city said they had nothing to do with it and told us to contact the state. Our opinion is this is a find on private property in the city of Northampton and it should be a matter of city interest,” he said.

Greg said that one day construction workers showed up on site and destroyed one of the dig sites before his sister called the police and removed them from the property.

“One of the major areas where they found artifacts on the property was completely destroyed on our private property so we were super pissed off about that. We cannot prove anything, but Native Americans said that is typical MassDOT behavior, they always try to destroy the site as quickly as possible before anything can be done,” he said.

Because the state had not taken the property prior to the project, Greg explained his family had the legal recourse to act.

“The only reason we were able to catch them this time was they screwed up and did not do the taking of the land before they did the archaeology. If they had done that on the state land, we would have no legal recourse. Since this was done on private property, we had the legal recourse to blow this whole thing wide open,” he said.

One of the flaws in the project John brought up was that the state did not consult the Narragansett or the Aquinnah Wampanoag tribes, or conduct the proper environmental surveys.

“They made several major mistakes in that they did not contact the Native American Tribes, by law they are supposed to do that.  They did not even do an environmental impact report and there was never a wildlife or a tree assessment on the site and they were going to plow it over Aug. 6, without any consideration of non-compliance,” he said.

Greg added the tribes did not know about the project until the petition was posted two weeks before construction was set to begin.

While MassDOT sent a press release saying it was reevaluating the project, Greg said they have not received notice that the project’s status had changed.

“They put this press release out, yet us who have legal consulting status, along with River Valley Co-Op and the two Native American tribes, none of us have received a single letter from the state about a change in the legal status of the project,” he said.

With the project going back to the drawing board, John said he was happy the site may be used for future research.

In his experience dealing with MassDOT and Native American sites, Narragansett Tribe Monitor Joe Graveline said MassDOT’s process for this project seemed to be full of shortcuts.

“It seemed very unusual to me that the DOT’s accountability for the process was skipped. It seemed like there were a lot of shortcuts taken by the DOT. I have not seen as troubling a sequence of shortcuts as I have seen on this project with DOT,” he said.

Despite the public speaking against the project and learning about what happened, Graveline said it seemed like both the city and the state wanted to push the project through.

“It still appears that the DOT and town of Northampton wanted to fight it. They wanted to pretend that there was nothing wrong. It feels to me like it was more important to ram the project through than be respectful to the citizens of Northampton and also to follow the federal and state requirements,” he said.

Graveline said he hopes MassDOT avoids the site with the project on hold while it is reevaluated.

“I am hopeful they got the message and will avoid that site; it is incredibly rare to find a 10,000-year-old site; that’s three times the age of the pyramids,” he said.

Graveline added that he thought the resolution of this project could set a precedent for similar cases of sites being discovered on private property.

“The way that the state words it is that if there is something of interest on a piece of property it becomes the property of the state, but when it is private property and taking something from that property without making arrangements with the landowners. I think there is a possibility of setting a precedent with this project and bringing to light some of the challenges that have existed in the state for the last four decades,” he said.

'They tried to hoodwink people’

Dr. Michael Gramly, a Harvard paleontologist, said he was happy the site was found for educational purposes but wishes it was found under better circumstances.

“I think it was positive that it was found because it educates us. Every time we find a place like that we did not know about before provides a model for future searches. It was very sad that instead of preserving the site, the idea was that they should do a perfunctory excavation,” he said.

Despite the archaeology team finding about 2,000 objects on site, Gramly said he expects there is even more to be uncovered.

“Based on other sites in the region in eastern North America, we know there is more to be unearthed there. There is a lot more still there I do not doubt, and some of it may be even deeper in the ground. We know there were 2,000 objects found, people thought there were about a third of that number,” he said.

Gramly said the site was especially interesting because many sites with Native American artifacts have seen some sort of damage.

“Remarkably, that site was minimally disturbed by plowing and agricultural activities, so that makes it especially interesting. Many sites are plowed to pieces or they have been affected in one matter or another through erosion, but that site somehow escaped that attention,” he said. “Because it was slightly disturbed, the Skibiski site certainly qualified as a place worthy of preservation and instead they want to destroy it.”

Gramly said one of his concerns is that the excavation was done quickly and said he was frustrated other archaeologists cannot look at the artifacts.

“It was a quick job, they tried to hoodwink people into thinking they got all of the information of importance when they have not. The objects have been taken off to Connecticut and scientists like me do not have access to them, it is ridiculous,” he said.