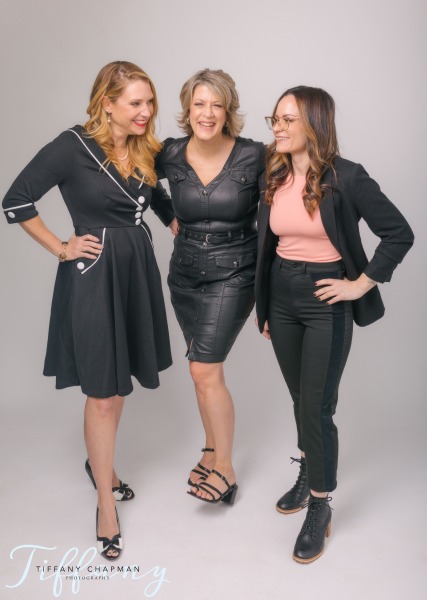 Allen (left), Chapman (middle), and Fournier (right) are three entrepreneurs who created The Resilient Project to uplift the voices and stories of other female entrepreneurs in Florence and Northampton.
Photo credit: Tiffany Chapman photography

Megan Allen, Tiffany Chapman, and Carrielynn Fournier created “The Resilient Project” to highlight the stories and voices of female entrepreneurs through podcasts and portraits to elevate their voices and build connections between fellow owners.

Over the past three months, Allen, who is the chief learning curator and founder of The Community Classroom, has conducted one-on-one podcasts with various female entrepreneurs throughout Florence and Northampton to get to know the women behind the businesses, while Chapman, who is the founder of Tiffany Chapman Photography, snapped portraits of the owners.

“Women come to running a business and leadership with a different set of struggles and successes,” Allen told Reminder Publishing. “With this two-pronged approach, we’re wanting to share the stories through the photos and the podcasts.”

So far, Allen has conducted podcasts with owners like Laurel Boyd of Ascendance Inner World Arts, Lexi Walters Wright of High Five Books, and Mayor Gina-Louise Sciarra, as well as many others.
According to Allen, the initial outreach in early winter was difficult due to the omicron wave of COVID-19, but as the project continues to gain traction, more and more owners have reached out to participate.

“We have such good business networks like the chamber (Greater Northampton Chamber of Commerce), the Downtown Northampton Association, and the Florence Civic Association, but women come into running a business with a different set of needs,” said Allen. “So, we’re really craving a network that can focus on some of those, not just professional needs, but personal needs.”

Allen founded The Community Classroom in 2020 after two decades of work in public school education and higher education curriculum development. She is a National Board Certified Teacher who has worked in several roles in education, including 10 years as an elementary school teacher and special education teacher in Florida.

The Community Classroom is located at 29 N. Maple St. in Florence and offers online tutoring to students all over the country. At the classroom location, in-person tutoring is offered, as well as guided homework support, academic coaching and more.

As someone who opened this business during a pandemic, Allen noted how this project is also a way for female business owners in Florence to connect after a period where everyone felt isolated. “We’re a little bit siloed in some cases, so we’re trying to find ways to bust out of those silos and better network and support each other,” she said. “There are businesses that I never knew were right down the street from me. Even just compiling the list has been lots of fun.”

Chapman, meanwhile, told Reminder Publishing that she fell in love with photography a little over 15 years ago, and started doing it professionally in 2015. She began working eight hours a day in an information technology (IT) job after going to Bay Path University, but also simultaneously began photographing and editing weddings remotely through her own business after shooting a wedding for free and reaching out to a mentor for help.

Her photography business really started to propel five years ago after she herself was photographed professionally for a portrait. That experience, according to Chapman, changed the course of her own career.

“I never felt beautiful in a portrait until I saw that,” said Chapman. “I guess that’s what propelled me to giving back what I had been given for an experience.”

Chapman first began using her living room as a studio for her business before renting space in Florence. Now, for the last four years, she has had her own space at 296-C Nonotuck St. While she still does weddings and other types of photography, her bread and butter soon became showcasing and empowering women through her portraits. “I started creating a personal branding genre for my clients, especially realtors,” said Chapman.

Her passion continued to shift fully into photography, and in July of 2020, she was furloughed from her IT job-along with 1,100 people in her company-after over 18 years in that business. The experience was bittersweet, according to Chapman, because it pushed her to become her own boss in the process.

She met Allen several years ago when Chapman and her mentor photographed Allen’s wedding. As two people who belonged to Northampton’s Chamber of Commerce, Allen and Chapman met once again years later at a chamber event.

Fournier, who did a branding session with Chapman in 2019, texted Chapman about four months ago and suggested that she use her photography and branding talent to uplift and empower women business owners throughout Florence.

Chapman presented Fournier’s suggestion to Allen when they reconnected for coffee after the chamber event, and Allen was ecstatic about the idea. Allen came in for a branding session with Chapman later on, and that is where the two came up with The Resilient Project name. They started gathering women-owned businesses in the area and found there was more than they imagined.

“There’s so many women in Florence that run businesses,” said Chapman. “We found that there were over 25 businesses in Florence run by women.”

Chapman invited all the business owners who were interested in participating in this project for individual portraits, as well as a group portrait. She said the coolest part was just watching all the owners connect and talk with each other during the portrait sessions, and Chapman hopes they will come back to visit and talk further.

“Moving forward, I’d love to invite these women back and do a social hour talk,” said Chapman. “We’re all in the same boat in some respect, but some owners have been in business for 10 to 15 years and never had a professional portrait.” According to Chapman, some of the owners want to do their own personal framing sessions with Chapman after realizing how important these portraits were to their business trajectory. “What I’m hearing is we really need this community of women to be closer-knit,” Chapman added. “It was fun to see the personalities come through during the portrait sessions.”

Fournier’s business, Busy-Bee Cleans LLC, began in 2019 as a startup in Florence. Currently located at 40 Main St., Busy-Bee Cleans offers deep cleaning services to residential and commercial spaces. They have also worked with several real estate agents and brokers across the state. According to their website, they were voted best house cleaner in the Advocates Best of the Valley in 2021.

“I just decided to dive in, and [the business] took off,” said Fournier, adding that she has lived in Florence for close to 15 years after going to high school in Buffalo. “The community really took to it.”

Fournier told Reminder Publishing that starting the cleaning business has really defined her as a woman and helped to inform her initial idea of The Resilient Project. “There’s networking groups obviously, but for women entrepreneurs, I just feel like it’s a little bit more of a challenge to be heard and to really be seen, especially as an individual behind the business,” said Fournier. “I pitched the idea, Megan and Tiffany ran with it, and it’s just getting picked up everywhere, because I feel like this is a really important project for the community.”

Fournier said the project has allowed her to be in tune with her own creativity and added that she never imagined it growing to where it is now. “I’m really in-tune with my inner self,” she said. “It’s awesome seeing these positive things being brought to light.”

As a celebration for this project, there will be a free sidewalk reception from 6 to 7:30 p.m. on April 8 to reveal the portraits of everyone who participated in The Resilient Project. The reception will be a stopping point during Northampton’s April Arts Night Out. It is open to the public, so people can meet the women behind this project. Signature mocktails will be served, each named after a woman important to Florence’s history and comprised of ingredients that represent resilience, strength, and uniqueness.

The reception will include a window display of the group portraits in front of 175 N. Main St. at the old Faces storefront. The portraits will be up for the entire month of April for the public to see.
Due to the volume of business owners who have reached out, Allen, Chapman, and Fournier also plan on continuing the project in the fall to highlight more female business owners.

People can learn more about the project and listen to the podcasts by visiting this website: https://thecommunityclassroom.com/resilient-project/.

“I’m really looking forward to meeting all of these wonderful women with these beautiful stories,” said Fournier. “Their resilience is awesome.”