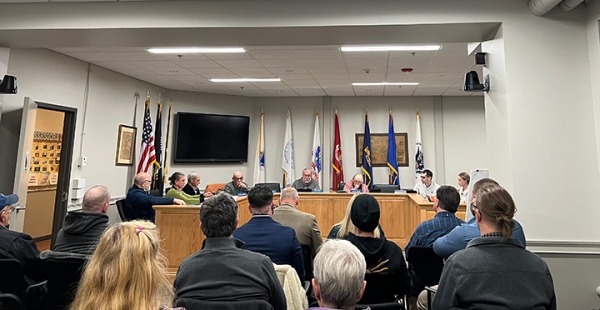 Palmer residents gathered on Nov. 21 for a public hearing on a proposed marijuana retail facility in the Pioneer Plaza.
Reminder Publishing photo by Lauren LeBel

PALMER – The lack of information regarding stormwater management has led to the second public hearing continuation of Green Adventures, a cannabis establishment looking to move into the Pioneer Plaza.

Green Adventures LLC is seeking a special permit and site plan approval to redevelop the existing buildings to conduct cannabis retail sales on the property located at 1240 Park St. in Palmer.

The first public hearing took place during the Oct. 17 Planning Board meeting. At that time, Don Frydryk from the engineering firm Sherman and Frydryk explained that the proposed cannabis facility is on the northwest side of the building, in a 1,250-square-foot space. This space was formerly occupied by Chmura’s Bakery.

With all the information laid out by the applicant including security measures, product sales, odor control and more, one concern was with the stormwater. John Furman, managing director at the engineering firm VHB, said the site has a large gravel area that runs into Breckenridge Street when it rains. In Green Adventures’ application, they requested a waiver for part of stormwater management, however, Furman shared, this should not be waived. Instead, he said it needs to be evaluated and investigated to address the problem on Breckenridge Street. To learn more about the stormwater issue, Frydryk said they would talk to the owners. To provide them with time to do so, the Planning Board agreed to continue the public hearing until Nov. 21.

Furman continued, “The stormwater management bylaw intent is to set a standard for new projects coming in, to hold and also to take existing projects and see if we can get some sort of betterment or control over these projects.” He said the main item was to establish a stormwater agreement. “As we were looking at this, the existing site plan does not have a complete picture of what the stormwater system does,” said Furman. He noted that the original owner of the property was asked by the state to install a retention basin, although the site plan does not show one. Because of this, he shared that an additional investigation and analysis needs to be done.

Michael Marciniec, Planning Board chair, asked, “At the present time we don’t really know what is there, where it’s going or whether it’s functioning?” Furman said Marciniec’s interpretation is correct and this is a fair characterization of VHBs request.

Isaac Fleisher, legal counsel representing Green Adventures, said his concern is that they don’t know if a retention basin was ever installed. “We don’t have the right or the capability to install one at this point. We don’t own it – we are leasing a small portion of the site.”

Fleisher said the biggest problem seems to be the runoff on the gravel area and they have tried – to the best of their ability – updating the site plan to reflect that. He added that the site has no existing violations.

“None of this has to do with what we’re proposing today,” said Fleisher. If they are denied a special permit on these grounds, he noted that the problem would still be there because it’s not being caused by the initial proposal.

Marciniec said the board would not be voting on the matter until they have enough information submitted about the site. He added that the DPW should be investigating the stormwater issue as well.

Kelly Jordan Peabody, a Palmer resident and owner of Gotta Dance Studio in the Pioneer Plaza, shared her concerns during the Oct. 17 public hearing. Primarily, her concerns pertained to the distance from her studio to the proposed location.

According to the town’s buffer zone laws, Fleisher said no cannabis establishment should be located within 500 feet of a property boundary line of a school providing education to preschool, kindergarten, grades 1-12, or a daycare center. He noted that the CCC uses similar language.

Fleisher shared that the term “school” isn’t specifically defined in the zoning ordinance. However, according to the Palmer Board of Health, school is defined as public or private, elementary, or secondary schools.

On Nov. 21, Marciniec said they did forward Peabody’s buffer zone questions to the town attorney. He reiterated Fleisher’s previous points and noted that this does not include a dance studio. Although he understands Peabody’s opinions on the matter, he said there is nothing in the regulations to say they cannot have this.