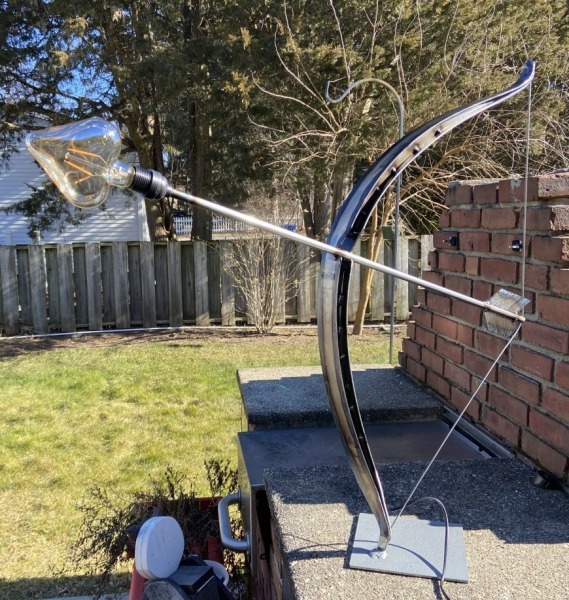 David Dorough said he moved to South Hadley about five years ago after working and getting married in Las Vegas. He and his wife, who both work for the U.S. Fish and Wildlife Department, moved to the town after she was offered a job in Hadley.

Dorough said it was about a year and a half ago when he began using a variety of objects such as old tools to create small sculptures.

As someone who had previously worked in construction and previously was a woodworker, he said the transition was easy and less messy.

"I did woodworking all the time, got tired of the mess. I had my welder stuff sitting on a shelf,” he said. “I’m self taught on everything I’ve done.”

“I’m trying to do everything right. I am a federal employee so I need to make sure I do everything right,” he said. Additionally, he said he’s “investigating the Facebook Marketplace page,” as a way to sell his creations and will be making a Facebook page for his business soon. Ideally, he said, he would “like to be selling within the next 45 days.”

Dorough said he uses items he finds at tag sales, junk stores or that have been given to him. He said during his travels for his job he chooses to drive rather than fly, and visits stores along the way. “When I’m out doing my inspections, most of our properties are off the beaten path, so I find old country stories, farmer’s junk piles. People say, ‘I have this at home and it broke, do you want it,’” he said.

He spoke of a lamp donation that he’d recently received that he planned to turn into an angler fish lamp. “When she sent it to me, I’m working on an angler fish that I’m building into a big lamp. They have the light over his face that would light up, so I’m making that into a lamp,” he said.

Most often he said he finds himself looking at tools such as vice grips and seeing fish. “I do a lot of fish for some reason, I look at tools and see fish. I use vice grips, they started life as a pair of six-inch needle nose vice grips and I turn them into blue marlins,” he said.

He said when he wanted to make things, “I just sit down and make them.” Recently, he said his wife challenged him to see how much he could make in one day.

“The horseshoe turtles that I make, I sat down and made 10 of the sea turtles, three owls and a heart sculpture out of chains,” he said.

Dorough said each turtle takes just 45 minutes to make. He attributed this to his lack of measuring and his desire to simply follow his creative instinct.

“I rarely measure anything. I just see it, bend it to shape, and make it look like what I want it,” he said.