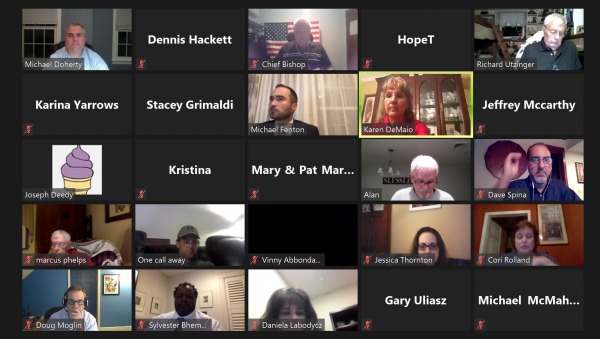 The Southwick Planning Board meets with residents and representatives from Verizon during its Oct. 6 meeting.
Screen capture by Dennis Hackett

SOUTHWICK – After residents raised concerns over a lack of certified mailing notice for a public hearing about a proposed Verizon cell tower at the last Southwick Planning Board meeting, the board hosted the first part of the public hearing at its Oct. 6 meeting.

To start the hearing, representatives from Verizon presented the plan for the tower and Jay Latorre, a principal radio frequency expert with Verizon, explained why the tower was necessary.

“The primary reason for this facility is twofold. The first is coverage, Verizon is experiencing a coverage gap in this area of Southwick due to the fact there is a meaningful distance to the closest facility. Being a wooded area, this does create losses of wireless signals and a need for additional facilities to maintain quality service,” he said.

Latorre added that the new tower will help boost its service in the surrounding area.

During the meeting, several residents said they were concerned by the fact that the coverage map used in the presentation was different than the one in the town’s documents.

“My confidence on your presentation is out the door, we’re zero for two. Now there’s a site evaluation with a site map that wasn’t the right one. That’s a responsibility that falls on Verizon, they should be providing all the appropriate materials that would impact the location of the tower in Southwick,” Southwick resident Matt Sekovich said.

Planning Board Chair Michael Doherty said he was not sold on using a residential area as a site for the tower.

“I don’t necessarily agree that what Verizon thinks is the best location is necessarily what the board has an obligation to grant just because you met the specific needs of the bylaw. That’s why I thought it was important to address the alternate locations because I look at open land near the school and on Hudson Drive as likely meeting your goals and being better sights than residential neighborhoods,” he said.

Michael Fenton, one of the attorneys representing Verizon, said that they would include documentation for alternative sites at the next meeting,

After residents said they were concerned with the health risks of exposure to radio waves, Latorre said there was little danger in the frequencies.

Doherty also asked if it would be possible to use smaller poles as opposed to using a full cell tower and Latorre said the tree coverage would make that more difficult.

“The challenges with a suburban area such as Southwick is that when you’re developing facilities at that short of height, when the foliage we deal with in New England for six months out of the year, it becomes increasingly difficult for Verizon to provide an effective wireless experience,” he said.

With over 70 residents listening in on the call, the board had to once again continue the hearing to its next meeting on Oct. 20 in order to provide more public comment time.