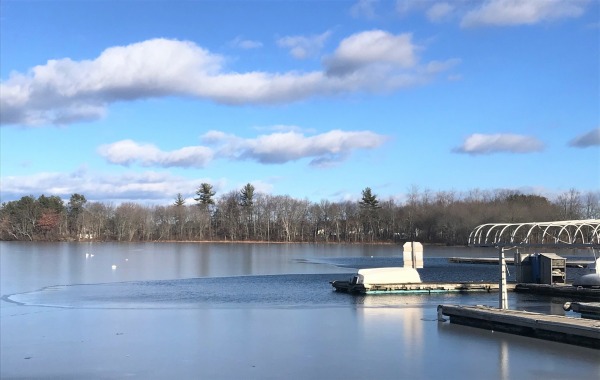 Open water can be seen on South Pond from the dock at Saunders Boat Livery Jan. 5, 2020.
Reminder Publishing photo by Hope E. Tremblay

SOUTHWICK – Winter has frozen much of Congamond Lake and cold weather enthusiasts may be tempted to brave the ice. However, Lake Management Committee member Richard Grannells warned that there is a lot of open water and thin ice on the three ponds that comprise the lake.

Grannells said people considering winter activities on the lake should use caution.

Grannells said when he first moved to Southwick many years ago, Congamond Lake would have ice that was 30-inches thick.

“We don’t get that anymore,” he said. “We’re lucky if there’s six inches of ice. Global warming has really hurt the thickness of the ice.”

Grannells said there are spots of open water on all three ponds. On South Pond, the open water is often the result of geese feeding on the pond.

“The geese stay year-round,” he said.

“The springs are nice and cool in summer, but warm in winter so it thins out the ice,” said Grannells.

The dark waters absorb sunlight, which Grannells said thins the ice, which is also thinned in the channels between the ponds.

“Congamond flows under the ice from North Pond to Middle Pond to South Pond and out Canal Brook,” he said. “That tends to thin out the ice in the channels north and south of the two inter-lake culverts.”

Currently, there are areas of open water as long as 40-feet and as wide as 15-feet, Grannells said.

Winter fisherman can often be found on the lake in January and February. Grannells said the town adopted a bylaw several years ago restricting ice fishing holes to 10-inches in diameter. The town also has bylaws against driving snowmobiles on the ponds or having a fire on the ice or within 25-feet of the lake.

The Lake Management Committee meets the second and fourth Thursday of each month at 7 p.m. at Southwick Town Hall, 454 College Hwy.