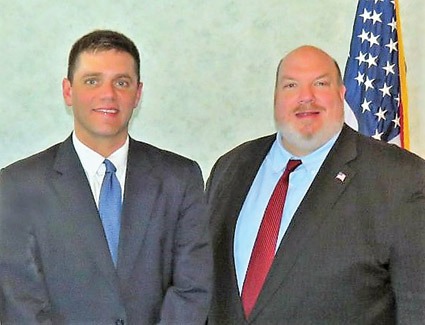 State Rep. John C. Velis, a Democrat, and state Sen. Donald F. Humason, Jr., a Republican, will discuss government and how they work together Sept. 30 at Southwick Town Hall. The event is sponsored by Better Angels of Hampden County.
Reminder Publishing file photo

SOUTHWICK – Bringing together people with opposite political views often creates a volatile situation. To keep the peace and bring back civility, open discussion, and understanding, Better Angels is bringing political parties together in Western Massachusetts at their Sept. 30 bi–partisan public event.

Chapters of Better Angels began forming around the country, including Better Angels of Hampden County, spearheaded by Granville resident, John Meiklejohn, a liberal. He joined forces with Southwick conservative Russ Fox, and the pair began bridging the local gap between blue and red.

The national Better Angels organization was formed in 2016 to unite “red and blue Americans in a working alliance to depolarize America,” according to its website. A group of Clinton supporters and a group of Trump supporters gathered for a weekend in Ohio following the 2016 election to try to respectfully disagree after the election divided the country.

Family therapist and community organizer Bill Doherty created a program for the weekend and the result was Better Angels.

Better Angels is named after a speech given by President Abraham Lincoln where he stated, “We are not enemies, but friends. We must not be enemies. Though passion may have strained, it must not break our bonds of affection. The mystic chords of memory will swell when again touched, as surely they will be, by the better angels of our nature.”

Meiklejohn hopes people from all political affiliations come to the event and bring “questions, curiosity and an open mind.”

Fox said he hopes hearing from local legislators that work across party lines will help spark the same from citizens.

Meiklejohn and Fox know it’s no easy task to bring liberals and conservatives together, but they hope Better Angels of Hampden County will do just that and attract more members to the group.

“We want to grow, and we’d like to have younger people join us,” said Fox.

Better Angels requires an equal number of members from the left and right and calls for a 75-percent majority before taking any action.

The approach is guided by the Better Angels Pledge, which states, “As individuals, we try to understand the other side’s point of view, even if we don’t agree with it. In our communities, we engage those we disagree with, looking for common ground and ways to work together. In politics, we support principles that bring us together rather than divide us.”