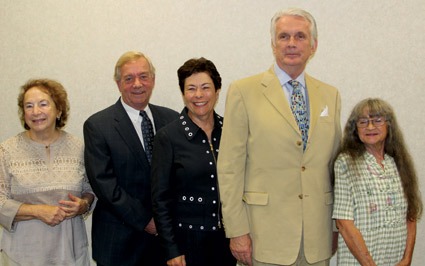 Teresa Utt, chair of this year’s Trustees, said the recipients were not selected for their efforts as fundraisers or “for how many seats they could fill or who they know.”

Instead she said these people are “the voice of the voiceless.”

Bewswee, the founder of Arise for Social Justice in Springfield was introduced by Pynchon trustee Gary Czelusniak, who described her as “an advocate, activist, troublemaker, rebel.”

Czelusniak spoke of Bewsee’s work challenging the installation of a biomass plant in the city as her latest effort to address a controversial issue. A Springfield native and a graduate of Cathedral High School, she founded the social justice organization in 1985.

Bewsee said in reply, “That’s a lot to live up to.” She said it was an honor to be named a Pynchon Award winner and noted, “Arise has given far more to me than I’ve given to Arise.”

Trustee Barbara Perry noted how Dill – the CEO of Colebrook Realty – has participated on many boards of area organizations, but has focused on education by his work with the Springfield School Volunteers, the Springfield Business Leaders for Education and the Funder Collaborative for Reading Success.

Dill, who described himself as a “refugee from Boston,” noted there is a different business structure here than in Boston that has allowed him to be out in the community having conversations with a variety of people.

“Springfield is really unique in that,” he noted.

Trustee Jillian Gould introduced Kirkwood who she said was “instrumental in having the Ronald McDonald House located in Springfield,” among many other charitable accomplishments. She was also important in founding the Rays of Hope Walk and served on the board for American International College for 24 years.

A native of Long Island, NY, Kirkwood said she moved to Springfield in 1974. “I loved living in the community,” she added.

She called her work with the college “a joy” and called it a “truly diverse” place.

Trustee Nancy Urbschat noted how Touhey is now only known for his fundraising activities, but also for as a founding board member for the Longmeadow Educational Excellence Foundation. He and his wife Pam also are involved with Residents Encounter Christ, a program that he conducts with inmates at the Hampden County Jail.

Touhey said, “First thing, I’m not worthy [of the honor]. I can think of 10 people who should receive it.”

He added he has met so many extraordinary people who make their community better.

Perry also introduced Wright whose dedication to the city of Holyoke was noted through her work with the Girl Scouts, Holyoke Community College, the Holyoke Medical Center and the preservation of the Mountain Park Merry-Go-Round.

She was also instrumental in the foundation of The Care Center, an alternative educational program for unwed teen mothers.

Wright said, she was “so grateful and overwhelmed” by the award. Speaking of her work she said, “People ask,‘What’s the magic? What’s your trick?’ There is no magic. It’s hard work. You gather up the people and you go for it.”

The recipients will be honored at a banquet at 6 p.m. on Oct. 27 at the Log Cabin.