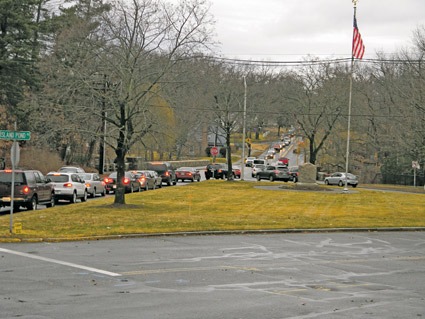 Traffic is heavy during the morning commute at the intersection now under study.
Reminder Publications photo by G. Michael Dobbs

SPRINGFIELD – The small cafeteria at Mary A. Dryden Veterans Memorial School was standing room only Jan. 27 as 68 East Forest Park residents crowded in for their first look at the most recent rendition of proposed plans to revamp the intersections at Roosevelt Avenue and Island Pond Road and Alden Street and the General Edwards Bridge.

The city identified the intersections as in need of improvements to increase public safety in 2008.  The project has undergone several design revisions since an initial improvement was proposed in 2009.

Conducted under the auspices of the Massachusetts Department of Transportation (MassDOT), Project Manager Shahper Negah told attendees that Jan. 27 was a fact-gathering session.

Presenters included representatives from Mass DOT and the design firm of Fuss & O’Neil, which has offices in West Springfield.

“The project is in its preliminary stages,” Negah said. “We are here to listen to your input.” She said the meeting was being recorded so all feedback and questions could be brought back to the DOT for review.

Nick Lapointe, a project engineer with the design firm of Fuss and O’Neil, explained the proposed $2 million federal and state funded project, which includes improvements to the intersection of Roosevelt Avenue and Island Pond Road just prior to the General Edwards Bridge, the bridge itself and a section of Alden Street where it intersects with the bridge, was prompted by a concern for safety of both pedestrians and drivers.

He noted currently there is no designated access to Watershops Pond from Alden Street, no public access to the General Edwards statue on the traffic triangle, no ramps or crossing signals for pedestrians at any of the aforementioned intersections and that traffic flow is “very near peak capacity on Roosevelt Avenue” during typical morning commute times.

“In the morning going north [on Island Pond Road] you have to come to a stop sign, look over your right shoulder [for oncoming Roosevelt Avenue traffic], cross your fingers and hit the gas,” Lapointe said candidly.

Under the proposed redesign the Roosevelt Avenue-Island Pond Road intersection will be converted from a merge with a stop sign to a “T” shaped intersection with a crosswalk and Americans with Disabilities Act (ADA)-compliant traffic signal. Lapointe said during non-peak hours the Roosevelt Avenue signal would “rest on green” and a pressure plate on the Island Pond side would trigger the traffic signal to cycle.

Other proposed improvements include relocating the General Edwards statue to create a small park on the west side of Island Pond Road, realigning the traffic lanes on the General Edwards bridge to accommodate 5-foot bike lanes and resurfacing the bridge, adding ramps and ADA-compliant pedestrian signals at the intersection of Roosevelt Avenue and Alden Street, and both improving the sidewalks and adding a bike lane on Alden Street.  The project limits will extend just north of Alden Street to Overlook drive.

Public comments to the proposed plan ranged from questions about the exact placement of the traffic signals at the new Island Pond Road-Roosevelt Avenue intersection to concerns about a lack of sidewalks along the curve of Alden Street.

Donna Dunn – a resident of Arcadia Boulevard, which intersects Island Pond Road just before the current merge – asked why the latest reconstruction plan showed a “T” intersection when an earlier plan had proposed a modified roundabout to alleviate traffic.

“You have done nothing to improve my safety,” Dunn said.

Anthony Dipace thanked MassDOT for making the proposed changes to the Alden Street part of the project, saying his wife had written a letter to Mayor Domenic Sarno asking for a pedestrian light at the bridge.

He added he felt MassMutual should “sponsor the project,” as drivers from the company’s parking lot routinely turn their commute into  “a speedway from Wilbraham Road to the corner of Alden Street and the bridge.”

Todd Croset, a resident of the Hill-McKnight district who routinely rides his bicycle on Alden Street asked the design team to “please put in arrows on the bike lanes directing [riders] in the right directions.”

Frank Griffin asked if there would be advanced warning of the upcoming traffic signal for drivers coming down the sweeping curve of Roosevelt Avenue toward the General Edwards bridge.  He noted the hill often becomes slippery in the winter, and an abrupt signal change could increase the potential for accidents.

John McLaughlin, a resident who has navigated the Island Pond Road-Roosevelt Avenue-General Edwards Bridge intersections since 1990 said he was “glad something is finally being done.”

Information on the Mass DOT website indicates the design process for the proposed changes was 25 percent approved as of Dec. 17, 2015. Negah said MassDOT expected to put the project out to bid in the fall of 2016, with construction, which is expected to last one season, to being in the spring of 2017.