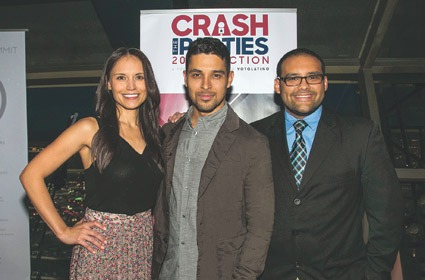 SPRINGFIELD – James Villalobos saw an opportunity on Facebook and he took it. The gamble paid off as Villalobos is one of two young Latino journalists to be selected in a national contest by Fuse and Voto Latino to cover the Republican and Democrat conventions this summer.

Villalobos, a graduate of Central High School and a senior in the journalism program at the University of Massachusetts at Amherst (UMass) had to submit an audition tape.

“Thankfully I went through with it,” he told Reminder Publications.

The contest “Crash The Parties” is a national campaign developed by Fuse Media and Voto Latino is designed “to open the doors for diverse media talent and empower millions of American Latinos to engage in the political process.” Judges, including Rachel Maddow, Jose Antonio Vargas and Katherine Vargas, reviewed the audition tapes.

There were 200 submissions with 10 semi-finalists and two finalists.

The son of Costa Rican immigrants, Villalobos is planning to be a broadcast journalist. He is a reporter for the Amherst Wire (http://amherstwire.com), the first digital student-run magazine from UMass.

Villalobos has written about how a Springfield woman collected water for Flint, MI, resident for the Amherst Wire and then took his spring break to go to Flint for an additional report.

He also reported from the South Lawn at the White House to cover the annual Easter Egg Roll.

He interned with Western Mass News in Springfield, as well as WCVB in Boston.

Villalobos will be reporting for Fuse, (www.Fuse.tv) a national television network for the Latino and multicultural 18-34 years-old audiences, from the Republican National Convention to be conducted July 18 through 21 in Cleveland, OH.

“It’s a really interesting time in the Republican Party – how divided they are struggling to get behind Trump,” Villalobos said.

He has a list of topics on which he will focus at the convention. They include gun control, especially in light of the event at the Pulse Nightclub in Orlando, FL; immigration reform; and education.

He noted how educational opportunities in the country have drawn people from other nations.

When asked what would he ask if he finds himself before Donald Trump, the presumptive candidate for the party, Villalobos took a moment and said, “Immigration.”

Villalobos asked in light of deportations,  “Why separate families? All they want is a chance to succeed.”

He said that Trump’s comments about Mexicans being “thugs, criminals and racists” spurred his interest in the Republican position on immigration.

He said his goal as a journalist is to “give a voice to the voiceless.”

Got a comment about this story? Go to http://www.thereminder.com and let us know.