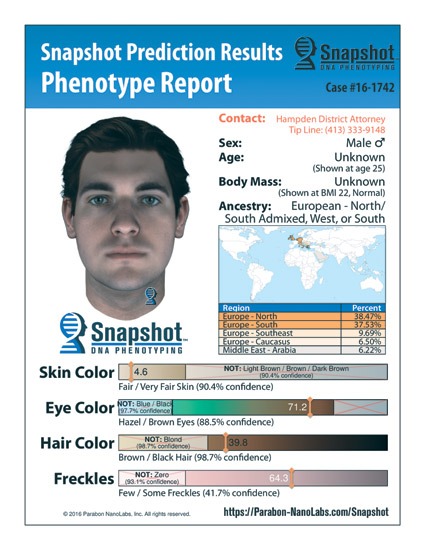 SPRINGFIELD – The computer-generated image may be the face of a killer and law enforcement officials hope you can recognize it. Thanks to advances in DNA analysis, there may now be a face to associate with the person who murdered Agawam resident Lisa Ziegert in 1992.

This is the first time law enforcement in Massachusetts has used the technology, which has proven helpful in cases in other states.

Gulluni said, “For the first time in 24 years, we have a face to this crime.”

Dee Zeigert, Lisa’s mother, said, “We are so hopeful this will bring Lisa the justice she deserves.”

She noted local law enforcement officials had never closed the case and thanked the district attorney’s office and the Agawam Police for their continued work.

When asked if she recognized the image, she said, “I’ve got to sit, got to study it. It’s going to take some time.”

The district attorney’s office supplied what is known about the case; “On April 15, 1992, Lisa Ziegert, of Agawam who worked at a local middle school, was abducted during the early evening hours while at her night job at a card shop in Agawam. The following morning she was reported missing by the store’s day clerk. Upon arriving in the morning, the clerk found the store open, the lights on, and Lisa’s car parked where it was the previous evening. The money in the store’s cash register as well as the victim’s purse and school materials appeared undisturbed.

“On April 19, 1992, four days after her disappearance, Lisa’s body was discovered in a wooded area approximately four miles from where she was abducted. Upon investigation, her death was ruled a homicide. Over the past 24 years the Hampden District Attorney’s Office along with the Massachusetts State Police and the Agawam Police Department have maintained an active investigation into the murder of Lisa Ziegert.”

Gulluni is asking the public for any information they might have about the man who is depicted in the reconstructed image. He noted the image is of a 25 year-old person and the process cannot account from variables such as weight and personal choices, such as hairstyles.

He noted that hundreds of persons have been investigated over the years. The district attorney explained that while there are other open or “cold” cases, what made using this technology possible was the presence of a single source of DNA among the evidence. He declined to say what is that evidence, but added few cases have the volume to allow such an analysis.

Agawam Police Chief Eric Gillis said over the years, the law enforcement community has been committed to the investigation, despite the passage of time.

“This case has not fallen through the cracks,” he added.

Gillis described the release of the image as “giant.”

If anyone has any information regarding this case, please call the Hampden District Attorney’s Ziegert Tip-line at 333-9148 or the Agawam Police Department at 786-4768 or anonymously by using Text-A-Tip by texting the word C-R-I-M-E-S (274637) and beginning your tip with the word SOLVE.