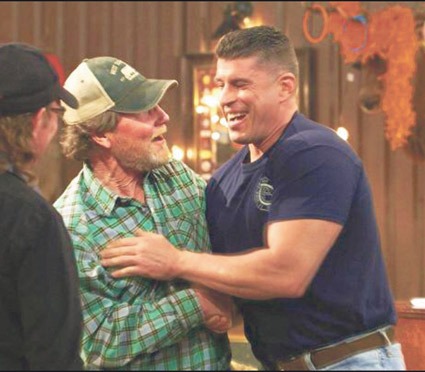 SPRINGFIELD – Springfield firefighter Capt. Rob Duffy is on a path he never imagined traveling. He said his effort to develop and market his invention the Quick Step Anchor has given him a crash course in accounting, patent law and marketing among their topics.

His latest lesson was on raising capital and was seen nationally on a recent episode of the CNBC show “The West Texas Investors Club.”

Duffy, a Wilbraham resident, told Reminder Publications, Mike “Rooster” McConaughey and Wayne “Butch” Gibson operate a lot like the investors on “Shark Tank.” The two men have made themselves rich from the cattle and oil business, according to the show’s promotional video.

He said, “They are nice guys, but they are business men.”

Duffy’s invention provides firefighter with a fast and safe metal platform on which to stand while on a pitched roof. The Quick Step Anchor is manufactured locally by Jesko Tools in Indian Orchard.

His inspiration came from seeing a fellow Springfield firefighter slip and fall from a pitched roof. As the Captain of Training for the department he wanted to address hazards such as that.

Duffy recalled how he had to pass the show’s backgrounds checks and was interviewed on Skype in order to get on the show for chance to receive investment funds. Once accepted, he was sent a plane ticket and was delivered to a hotel “in the middle of no where” in Texas.

He said initially appearing on the show was stressful, but once it was over he viewed it as “kind of fun.”

Duffy added, “Everything was very unscripted. It’s the realest realty show you could be on.”

Besides speaking with the two men about his invention, they set up a realistic test to demonstrate it. The show’s producers built a pitched roof structure complete with shingles and, with local firefighters looking on, set it ablaze. Duffy in full firefighting gear climbed a ladder with the Quick Step Anchor slung on his back carrying a chain saw. He quickly cut a slit in the roof through which to inset the bottom portion of the anchor and installed it. He then showed how he could stand on it while cutting a large hole through which gas and smoke could escape.

The demonstration led to the two investors’ decision to award Duffy $50,000 in return for 15 percent of his business.

“That doesn’t mean I walked away with a check,” Duffy explained. He must now build up a sales force to market the invention to fire departments nationwide.

“They gave me a lot of good ideas, gave me some time so I could get it [sales force] set up,” he said.

Duffy thought of the ideas five years ago and made the first prototype himself in a welding shop. Working with Richard Kowalski of Jesko Tools, he has refined the design and decreased its weight from 18 to 11 pounds.

The reaction from the fire fighting community has been positive. David Hesselmeyer of the Carolina Fire Journal tried it himself and wrote, “ This is another tool that I would want on my truck. I can live without this tool but in a tough hazardous job like we work in I would so much rather have this tool to make my job easier and safer. I recommend this product.”

What Duffy has realized is the sales effort requires not only a sales force, but also a continuing presence at trade shows. He is now working to improve that part of the business.

He is also tackling how to sell the anchor to the construction industry for anyone having to work on a roof, which he believes would be another big market. A challenge is to lower the cost of the anchor – it sells for $1,100 – while keeping its manufacture local.

Duffy credited Reminder Publications Co-Publisher Chris Buendo for helping him develop a business plan that has helped guide him through the process.

Although he was offered a buy-out from a large company, Duffy is interested in seeing how far he could go with his invention. Ideally, he said, he would like to see every fire truck in the country carrying a Quick Step Anchor.

For more information, go to www.quickstepanchor.com. For a clip from the show on which Duffy was featured go to https://www.youtube.com/watch?v=kNd72oiAPaM.