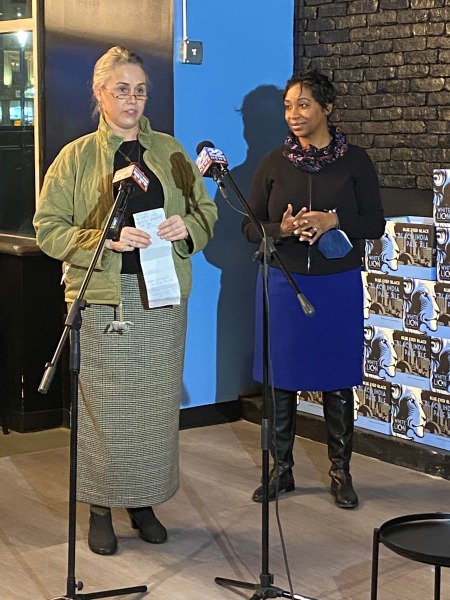 Campbell was introduced at the announcement, conducted at the White Lion Brewing Company tap room, by Easthampton Mayor Nicole LaChapelle, who told Reminder Publishing she has known Campbell for several years.

LaChapelle said in her introduction, “She walks the talk.”

Campbell spoke about her background, growing up in Roxbury in a family of “incredible insecurity.”

“I have suffered many of the problems people have now,” she said and recounted how she didn’t know her father until she was 8-years-old and that she has family members who have been in and out of prison.

She attended Princeton University and then received her law degree from UCLA.

Practicing law both in the private sector and in government, Campbell served as a legal counsel to Gov. Deval Patrick.
Campbell ran for the Boston City Council in 2015 and was elected its president in 2018 – the first Black woman to do so. She was known in Boston as the councilor behind the passage of that city’s Community Preservation Act, which has provided funding for housing, parks and historic preservation.

Last year, she was a candidate for the position of mayor of Boston.
Campbell said she sees the role of the attorney general as a person who can affect positive change to a number of issues. She listed housing issues such as foreclosures, health disparities and racial justice as three of the problems the AG can address.

She promised to seek “innovative solutions” to these and other challenges.

Speaking about the role of the AG’s office in the issues of healthcare and health insurance, she said the AG can do “a lot” about both.
She said access to both is still a question “that goes back to is it a right or a privilege?”

Campbell added, “I want to take a stand on health disparities that affect people of color.” She is a supporter of community health centers and sees the need to further invest in them.

Campbell also spoke of regional equity as another issue confronting the AG’s office, which she mirrored with her three region announcement.

Campbell’s announcement to run for AG followed one in late January by labor attorney Shannon Liss-Riordan. Liss-Riordan made her announcement in Boston and her campaign officials have told Reminder Publishing she does have plans to visit Western Massachusetts.

The goal for both candidates at this point is to establish name recognition. In a State House News story, MassINC Polling Group President Steve Koczela said, “Andrea Campbell, of course, former Boston city councilor and candidate for mayor, is I think probably to the surprise of no one, much better known inside 128 and draws a lot of her support from inside 128, whereas when you move further out, outside of 495 or further out than 495, two-thirds of voters out there haven’t kind of settled on a candidate.”

Campbell alluded to the need for greater name recognition across the commonwealth. She said, “I know that I have to introduce myself.”