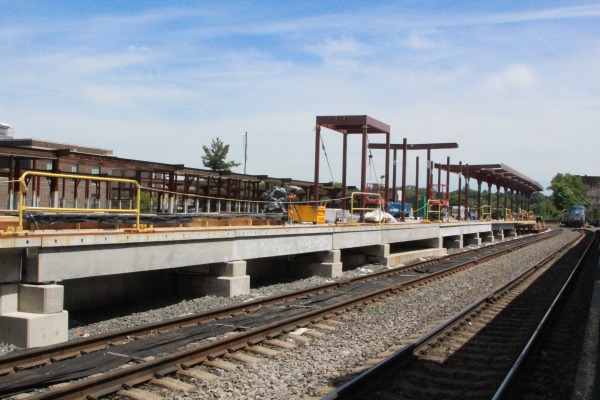 SPRINGFIELD – One more phase of development for Union Station has been completed: Amtrak has moved its ticket office into the main concourse.

The next step in modernizing the vintage train station will be the completion of new high performance platforms for Amtrak and other trains.

Congressman Richard Neal gathered with Mayor Domenic Sarno and others to mark the milestone on June 10.

Neal called the announcement of the ticketing office “a very significant day … from day one it was part of the plan.”

The former Amtrak station at trackside will be used at a later date for office space, an Amtrak official noted. There are numerous signs at the Lyman Street entrance directing people to go to the new ticketing area.

Kevin Kennedy, the outdoing Chief Development Officer for the city, said the platform – that will be reached by a new elevator and staircases – should be completed in three to four weeks.

Neal noted in his remarks the station complex is at 71 percent occupancy. Kennedy said the city’s support of the complex will decrease 23 percent next year, a signal of the success of the project.

Having Amtrak’s ticketing office “will bring a lot to the interior of the grand concourse,” Kennedy said.

Right now there is room for one more retail tenant and Kennedy is hoping a restaurant operation will be developed to encourage non-passengers to come to the building.

“A restaurant would provide a little bit of life to the station in the evening,” Kennedy said.

Tom Moritz, Amtrak assistant vice president of Infrastructure Access and Investment, said, “Stations are the heart of the communities Amtrak serves.” He added the stations “ are treasures not to be lost or forgotten.”

Sarno, noting the number of trains now servicing the region – both Amtrak and the Connecticut commuter line – said, “It is sort of ‘Back to the Future’ … people like to get back on the train.”

A pilot project for the Connecticut rail line to service residents of Greenfield, Northampton and Holyoke with north-south rail service should start late in August or early February, Neal said.