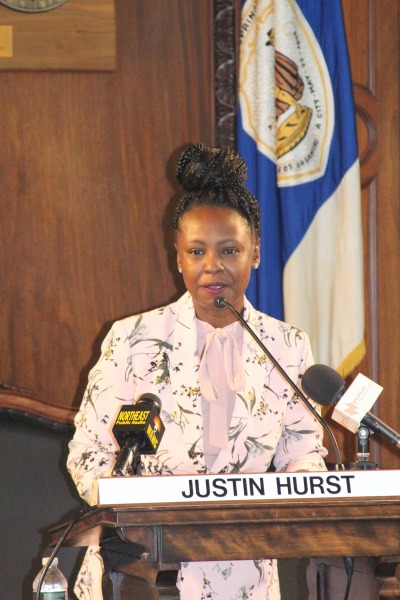 SPRINGFIELD – Associate City Solicitor Attorney Tasheena Davis made history last week as the first African-American woman to be appointed to the position of City Clerk in Springfield.

In her address before members of the City Council, Mayor Domenic Sarno as well as other city officials and family, Davis said that being in the spotlight was not something she sought.

“I need a moment to take it all in,” she said after taking the oath of office.

Describing herself as a life-long resident of the city, Davis thanked City Solicitor Edward Pikula. “He provided such great guidance,” she explained.

Davis said her first priority is to meet with the City Council and to start a working relationship with the councilors. Next, she said, she would be meeting with the staff to discover ways she can make the operations of the clerk’s office better.

She also wants to follow in the footsteps of her predecessor Attorney Anthony Wilson to “bring the clerk’s office into the future” with increasing uses of technology.

Davis admitted she hadn’t considered applying for the position until Sarno told her he was going to nominate her.

Sarno said she was his “point person” in the Law Department to handle cannabis issues. Sarno said that because of her experience she “will hit the ground running.”

Davis is committed the Open Meeting Act and said, “Government should not be done behind closed doors.”

City Council President Justin Hurst alluded to the public questions some councilors made about the process and what role both the mayor and the council had to play with the selection process.

Hurst concluded, “Government is working as it should.

Speaking to Davis, Hurst said she was not selected “because you’re black but because you were the best candidate who just happened to be black.”

In a written statement, Sarno wrote, “Congratulations to Associate City Solicitor and current Attorney to the City Council Tasheena Davis on becoming the city’s first African-American female city clerk. Thank you to the City Council for voting to confirm my nominee. Tasheena has a strong legal acumen and has done a tremendous job for our city. This is a natural progression and ensures a smooth transition for our city government.”