Baker and Polito return to Western Mass to thank supporters 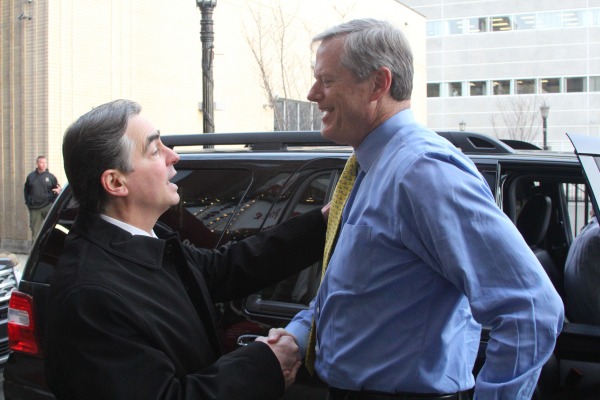 SPRINGFIELD – For Gov. Charlie Baker, returning closely to Western Massachusetts the day after his second inaugural was to make a point about his administration’s commitment in the region.

About 100 people crowded into the back dining room at Student Prince Restaurant on Jan. 4 to congratulate the nation’s most popular governor at a reception.

Baker and Lt. Gov. Karyn Polito came to Springfield the day after their second inaugural to thank supporters.

Baker had done something similar days after being elected for the first time four years ago. He visited Springfield Mayor Domenic Sarno at that time, surprising the Democrat. Baker recalled that Sarno had reminded him he had worked for his Democratic opponent and Baker said he knew that.

Four years ago, Baker remembered he told Sarno, “That was then. This is now.” He then asked the mayor what he could do to help the city.

Fast-forward to last fall, and Sarno appeared in a campaign ad for the governor. On Friday, he greeted Baker and Polito at this event.

Looking around the room, both Democrats and Republicans were present, something that underlined Baker’s philosophy of bipartisanship. Besides Sarno, West Springfield Mayor Will Reichelt was there along with other local officials such as Agawam Select Board member Cecilia Calabrese.

Baker noted that he and Polito had served in local governments and their efforts in the last four years “was to help communities be great and not just communities here or there but all of them.”

He said that was the reason behind Polito’s “making a point of visiting all 351 [cities and towns in the Commonwealth].”

Baker continued, “I think in many ways one of the most important thing state government can do is to help local communities succeed. We have tools, We have thoughts, but they need to be done in conjunction with, in cooperation with our colleagues in the Legislature who appropriate the funds that make a lot of this stuff possible and with our colleagues in local government around the things they think they’re going to have to work on to be successful.”

The governor said the Commonwealth has many transportation, education, resiliency and climate change issues, but he used the example of a culvert that needed repair in Forest Park to show the importance of seemingly little issues that have large local impacts. The culvert’s status prevented a road to being used at the park.

“I know it sounds crazy but I’ve literally said in my office, ‘Culverts are going to be a big part of our second term’ and people laugh,” Baker said.

He added there are “hundreds and hundreds” of culverts over which bridges and roads are built and if the culvert has a problem, the road and bridge have a problem.

Having visited The Student Prince many times in the past four years, Baker noted the venerable restaurant’s renewal under new owners was “a great story about Springfield and about possibility and hope as well.”

“On the ground in most communities if you create momentum, if you create positivity, you create hope. From our point of view this is what it’s supposed to be about. It’s been what the last four years has been about,” Baker said.