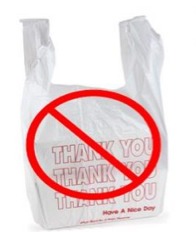 SPRINGFIELD – The City Council will begin the process two investigate a ban on single use plastic shopping bags in the city.

At the council meeting on Oct. 15, Councilor Jesse Lederman proposed the ban, which would end the distribution of single use conventional plastic bags across the city.

Lederman said two billions such bags are thrown away annually in the Commonwealth. Boston adopted such on ban in December 2017 and it will go into effect on Dec. 15. The Boston legislation asks shoppers to use reusable cloth or plastic bags, or pay 5-cents for either a compostable plastic bag or paying 5-cents for larger paper bags with handles.

“Obviously, this is a big step,” Lederman said.

Lederman’s draft of the ordinance sets out a timeline if made into law: “All of the requirements set forth in this ordinance shall take effect within six months of passage.  In the event that compliance with the effective date of this ordinance is not feasible for a small retail establishment, because of economic hardship, the Department [of Inspectional Services] may grant a waiver of not more than six months upon application of the owner or the owner’s representative.”

The ordinance would establish that “if any retail establishment as defined in section 1 provides a checkout bag to customers, the bag shall be comply with the requirements of being either a recyclable paper bag, a compostable and marine degradable plastic bag, or a reusable checkout bag” and “a store that provides any type of checkout bag shall sell them for no less than ten cents  ($0.10). All moneys collected pursuant to this ordinance shall be retained by the store.”

The proposed ordinance will now go to the council’s Health and Human Committee for review and hearings.

In 2016, Chicopee considered such a ban, but it was defeated. In that case the ban on plastic shopping bags also included a ban on Styrofoam containers.

In other action, the language of the marijuana retail ordinance was amended in some cases, mostly regarding fees. Councilor Kateri Walsh said there would be a need needs to be education of the fines, Walsh said.

Several councilors had questions about the ordinance in this draft form. Councilor Timothy Ryan said the city should define some sort of protocol for revocation of permit if a business incurs multiple fines. Councilor Tracye Whitfield asked about fee and punishment for an adult selling to a minor and whether or not it will be in the final version of the ordinance.

The ordinance will be going back to committee for additional revisions.