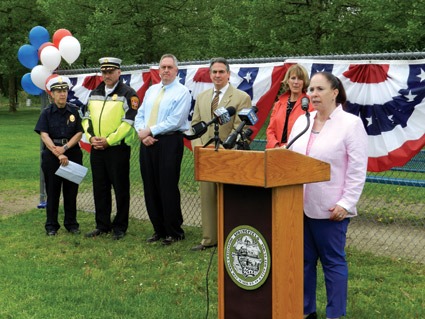 SPRINGFIELD – Construction at Riverfront Park has shifted the Star Spangled Springfield event to Blunt Park for this year, but Spirit of Springfield officials said the new location affords a greater space for the audience of the annual fireworks.

Judith Matt, president of Spirit of Springfield, said the city’s police and fire departments looked at many locations in the city that could accommodate the thousands of people who enjoy the Fourth of July celebration.

Matt explained the fireworks would be shot off from the park’s track area, which will be closed to the public on July 2,3, 4 and 5. People will be able to view the fireworks from the baseball field, as well as the parking lots of Central High School and Putnam Academy. Matt added the new Raymond Jordan Senior Center would afford the best views.

Closer to the date a list of nearby park and view areas will be released.

She said the audience would be much closer to the fireworks at this location and there will be three times the viewing space at Blunt Park compared to the downtown location.

The annual event will start at 7 p.m. July 4 with entertainment, food vendors and activities. The fireworks will be launched at 9:30 p.m. with a musical accompaniment on Mix 93.1 FM.

Matt admitted this was her favorite event the organization presents.  “This is our residents’ event and we want to make it the best for them.”