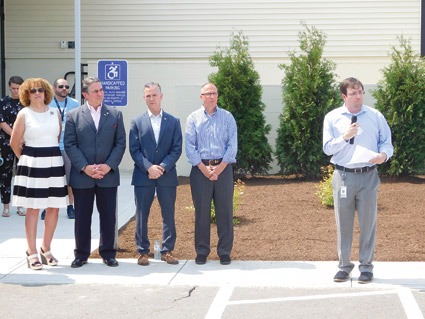 SPRINGFIELD – As soon as the ribbon was cut, the 20 patients who had been waiting for the official opening of INSA – the area’s first medical marijuana dispensary – formed an orderly line up the stairs to the front door.

It was an opportunity these men and women – many who have been traveling to INSA’s other dispensary in East Hampton for their medication – had been waiting for since the City Council first approved plans for a medical marijuana dispensary in the neighborhood in November of 2016.

“We’re really excited to open INSA, the first and only medical marijuana dispensary in Hampden County,” INSA CEO Mark Zatyrka told the crowd of employees, local officials, patients and press who gathered for the ceremony at the 506 Cottage St. location on May 25.  “Finally the patients in Springfield no longer have to travel long distances to get the medication they need. The wait is over.”

Referring to Springfield as “my home city,” Zatyrka said he was proud to be able to give back to the city that had given him so much.

“Springfield has always been a city of first, a city of innovations, an  exciting city, and that’s what drew us here, “ he continued, listing the city’s many “firsts including basketball, the Indian Motorcycle and the first American dictionary and commercial radio station. “We want to be a leader in a city that leads by example.”

He went on to thank the city councilors – past and present – the department heads and staff of the city, the Indian Orchard Civic Association, the East Springfield Neighborhood Council, the police and fire departments and Mayor Domenic Sarno for their assistance in helping INSA bring its “plant-based medicine” to local patients.

Sarno praised Zatyrka and INSA for bringing such a  “professional, techonlogical and public safety-based” facility – plus  70 new jobs – to the city, and thanked State Reps. Brian Ashe and Thomas Petrolati for their work in the Legislature to insure INSA and other medical canniabis businesses received approval to open medical marijuana dispensaries in the state. He also praised Health and Human Services Commissioner Helen Caulton Harris and State Rep. Jose Tosado – who sent a representative to the ceremony – for their work to bring the project to fruition.

“And Mark, I want to thank you and your company for your belief and investment in this city,” Sarno added. “We all know friends and family where medical marijuana, and its attributes  and different products, have been very helpful and have given them quality of life, and to be able to do that here in the city of Springfield … we’re glad and proud to have it here.”

Petrolati noted the vast knowledge and compassion of the INSA team, and how they were able to present a persuasive argument to the Legislature that medical marijuana dispensaries were needed in the state of Massachusetts.

“I hope we can continue to educate the general public about the need for medicine like this,” Petrolati added.

Caulton-Harris, who sat on the state’s public health council that helped craft the legislation for medical marijuana, praised Zatyrka and his team for the hard work they had done to bring their concept to fruition.

“From the very beginning they came to talk with public health, and we are about prevention and intervention, and that is what we celebrate today. We celebrate the ability for individuals with chronic diseases to be able to have access to medication that is going to be very important in terms of their health,” she said.

Zatyrka closed by thanking INSA’s “gracious” neighbors on Cottage Street, his employees, and the people of the City of Springfield.

“They have been amazing for us, working with us, every community event we go to we meet the nicest, friendliest, excited people, we’re her because of them and for them.

“We were able to get medical cannabis here because of the people and the citizens who stood up for what they knew was right and knew what people deserve,” Zatyrka continued. “We give people our word that we will continue to do everything that we can to provide the best quality products that we can and that we will be as responsible a company as we can,” Zatyrka added.

INSA is open from 10 a.m. to 7 p.m. daily to serve all medical marijuana certified patients.