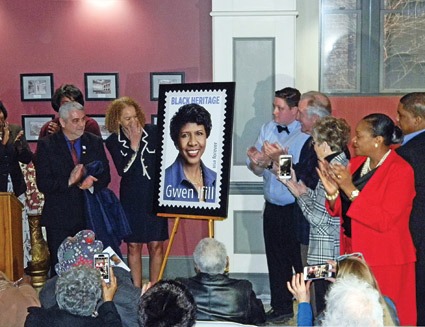 SPRINGFIELD – The late prize-winning journalist Gwen Ifill was honored in the high school from which she graduated on Feb. 9 with the unveiling of a first-class forever stamp in her honor.

Ifill, who passed from cancer in 2016, was a long-time reporter and anchor on “The PBS NewsHour.” She graduated from Classical High School in 1973.

Fellow Classical graduates, members of the Bethel A.M.E. Church and other Springfield residents gathered in the atrium of the former high school for the unveiling of the stamp that honors her many accomplishments as a journalist.

Ifill graduated from Simmons College and embarked on a newspaper career with the Boston Herald American followed by stints at the Baltimore Evening Sun, the Washington Post and the New York Times. In 1994 she joined NBC News as the its White House correspondent and then came to PBS in 1999, where she became the moderator and managing editor for “Washington Week.” She was also the senior political reporter for the “The PBS NewsHour.”

Congressman Richard Neal recalled how he knew Ifill’s father the Rev. O. Urcille Ifill, Sr. when the minister was working in Springfield. Neal noted the minister was very active in the community and was part of the city’s Human Rights Commission.

He recalled the last time he saw Gwen Ifill was 12 years ago when she was covering the presidential primary in New Hampshire. She was getting off the press bus when she spotted Neal and said, “You knew my father.”

Neal said that Ifill subscribed to every one of the rules of journalism developed by PBS anchor and reporter Jim Lehrer. They are:

• Do nothing I cannot defend.

• Cover, write and present every story with the care I would want if the story were about me.

• Assume there is at least one other side or version to every story.

• Assume the viewer is as smart and as caring and as good a person as I am. Assume the same about all people on whom I report.

• Assume personal lives are a private matter until a legitimate turn in the story absolutely mandates otherwise.

• Carefully separate opinion and analysis from straight news stories, and clearly label everything.

• Do not use anonymous sources or blind quotes except on rare and monumental occasions. No one should be able to attack another anonymously.

• Finally, I am not in the entertainment business.

The stamp is currently on sale at post offices across the city.