Cocchi lobbies the governor for additional treatment services for women 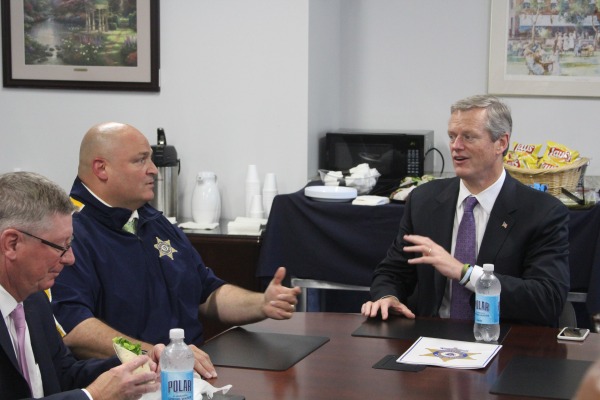 SPRINGFIELD  – Hampden County Sheriff Nick Cocchi told Gov. Charlie Baker there is a true need for a facility in Western Massachusetts for women who civilly commit themselves to address their addictions.

Baker toured the Stonybrook Stabilization & Treatment Center on Mill Street on Aug. 23 where he saw a facility that can treat men through Section 35 commitments but cannot treat women.

Under state law, a male addict can petition a judge to have him committed to treatment. Since May, 150 addicts have received treatment at the Mill Street facility.  The law, as presently written, would not allow female addicts to use these local services.

Female addicts must undergo treatment in Taunton, Cocchi explained. Being away from family and hours from home complicates recovery, Cocchi and other staff members told the governor and members of the Legislature, which included State Reps. Joseph Wagner, Brian Ashe and Bud Williams, as well as state Sen. James Welch.

Cocchi used as an example a female addict from Chicopee who died in route to the facility in Taunton.

Having wrap-around services close to home aids in the recovery, he added.

He pointed out to Baker there are no fences or walls around the facility.

For a woman to seek treatment through Section 35, a judge must send her to a DPH facility, Theresa Finnegan, an attorney for the Sheriff’s Department explained.

The Sheriff’s Department has been treating substance abuse issues for years, Cocchi said. A majority of people who come to the jail through the court system suffer from some sort of addiction.

The governor asked the sheriff what he would do about the problem if we had a magic wand. Cocchi was quick to reply he would keep all of the inmates with addictions at the jail in Ludlow and use the Mill Street facility for civil commitment for both men and women.