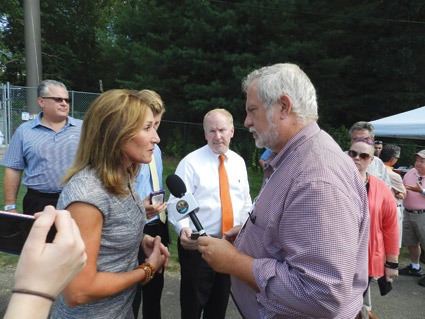 SPRINGFIELD – Sheriff Nick Cocchi was hoping to carry on a tradition started by his predecessor – Sheriff Michael Ashe Jr.  – and by the number of people who attended his version of the annual Sheriff’s Picnic, it would appear that he was successful.

Hundred of people came to the Elks Lodge in Springfield to eat, drink and perhaps more importantly, rub shoulders with local and state-wide elected officials and candidates for the election in November.

“I can’t tell you how exciting it was to know that we were continuing this tradition,” he told Reminder Publications.

For Cocchi, the picnic is more than just a way to raise funds, “it’s an opportunity for conversations.”

The success of the picnic also underscores the public’s acceptance of Cocchi as sheriff, he added, something that is very important to him.

His former boss, Ashe, affirmed his support for what Cocchi is doing as sheriff, the position he had for 42 years. Ashe said that while he is retired, he is continuing to work with community policing programs in Forest Park. He is basing the program in Springfield on one his department developed in Holyoke.

He doesn’t miss “answering the bell” every day, he said.

“I felt the responsibility, an obligation, to pass it along to someone who would continue the mission,” he said of his decision to retire.

As befitting a year with a local election, the number of statewide office holders and candidates was less this year – a typical occurrence. The top official was Lt. Gov. Karyn Polito, who came later in the afternoon for a relatively quick visit.

Speaking to the press and in anticipation of the scheduled white power rally in Boston, Polito came out strongly against the recent tragedy in Charlottesville, VA.
She said the initial reaction to the protest and counter-protest by President Donald Trump was “wrong.”

She added, “He should have, like any elected public official, come out quite clearly out of the box to denounce such behavior. We are a place that allows for peaceful demonstrations and protests.”

When asked if she and Gov. Charlie Baker were disappointed as Republicans in Trump’s statements, she said, “More than disappointment. We disagree in the way he handled this situation.”

In response to a question about the study concerning rail connections between Springfield and Boston, Polito said the Baker Administration would consider various transportation options, but did not commit to supporting the study put forth by state Sen. Eric Lesser.

Speaking to the gridlock in Congress, Polito said that she and Baker collaborate with the leaders of the legislature and that Washington, DC, “should take a page out of our book.”

Someone who would like to take over from Baker in the next election spent considerable time at the picnic meeting people. Setti Warren, the former eight-year mayor of Newton has his eyes set on the gubernatorial nomination of the Democratic Party.

Prior to arriving at the picnic, he sat down for an interview with Reminder Publications and Focus Springfield.

Warren, an African-American, said the recent events make him ask himself “What kind of world are we going to leave for our children?”

He said the Commonwealth and the country are at “a critical time” and three things drove him into the race: nine years in the Naval Reserve with one year serving in Iraq; his eight years serving a mayor; and his experience serving on his deployment in Iraq with people from all races and backgrounds united for a common cause.

When he became mayor of Newton, the city faced a $40 million structural deficit, no “rainy day fund” and two inadequate school buildings. He was able to establish a $20 million stabilization fund, eliminate the deficit and complete two new school buildings, with four more coming.

He said his municipal budget were based on “outcomes for people,” an approach he would bring to state government if he was elected.

Warren isn’t afraid to say that revenue must be raised at the state level.

He didn’t run for a third term in Newton as he was concerned how municipalities across the Commonwealth were falling behind. “This issue of economic inequality is the defining issue of our time,” he said.

Warren has proposed implementing single payer healthcare in the state and making public colleges tuition free as ways of “level the playing field and allow people to get the skillset they need to be successful in this state.”

He has also proposed a tax increase on people who earn more than $20,000 a week, with those funds going to education and infrastructure.

Warren doesn’t believe that Baker is interested in east-west rail, but he is. He believes Western Massachusetts has “an incredible potential to grow,” and transportation is critical.

Despite a recent national poll indicated that Baker is the most popular governor in the nation, Warren is undaunted.

“We’re going to be telling the truth about what it will take to get this done: transparency in the budget, raising revenue – I’m not afraid to say that, making proposals that make a difference, single payer healthcare, free public college, fully funded K-12, after-school enrichment programs, transportation … the economic bloom can’t just happen in the Boston area it has to happen out here. We can do it if we’re deliberate about it,” he said.