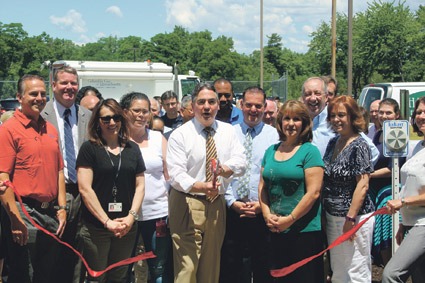 The facility had been headquartered at the company’s site off Roosevelt Avenue, but it has made the move to a building on Brookdale Street.

Inside the call center, flat screen monitors ring a large room with announcements for the employees and information about the number of customers requiring service. The desks in the cubicles are equipped desks that allow employees to work either sitting down or standing up.

“It is a much better environment for employees to interact with customers,” Bryant added. More than 100 employees will be at the new location and they handle 500,000 customer calls a year.

Bryant said the new facility is leased and will not make “ a significant impact on rates.” He called it a “lateral move” and more of a relocation of resources.

He noted the Roosevelt Avenue location housed three departments: construction and operation; customer service; and the meter shop. There is now a separate meter shop and in about seven weeks Bryant said a new operations center would be the “epitome of efficient operations.