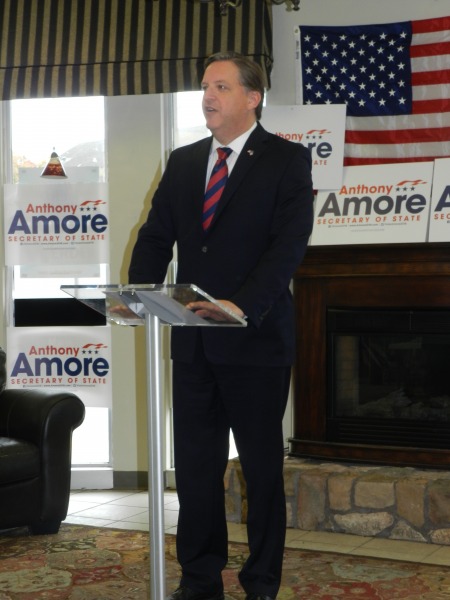 EAST LONGMEADOW – Republican candidate for Secretary of State Anthony Amore challenged Secretary of State William Galvin with three questions about forged signatures on the nomination papers for Cheryl Coakley-Rivera at a press conference on Oct. 29.

By press-time, though, Galvin has yet to respond. Reminder Publishing forwarded the following questions to Galvin’s campaign:

• “If Secretary Galvin told local election officials they are “not handwriting experts” and are unable to determine forgery, why did his own Elections Division fail to do so?”

• “Ultimately, whose authority does it fall under to determine if a signature collector has committed a felony by forging signatures? Who does the investigation, and who makes the recommendation to the attorney general for prosecution?”

• “If the process failed to uncover said forgery, why is Secretary Galvin claiming nothing can be done since the deadline has passed? Does that mean the statute of limitations for a felony act has passed as well? Will his office at least acknowledge their error?”

Amore said, “With less than nine days to go before a consequential election, it’s clear Secretary Galvin has no interest in uncovering obvious examples of fraud in our election system. We’ve seen other states catch illegal voters in Massachusetts, and now Secretary Galvin lets illegal signatures to support a Democratic candidate for an office under his purview slide right through the certification process. His excuses are more than disingenuous – they are dangerous and threaten to undermine confidence in our elections.”

The center of the local controversy came about with the discovery of 10 people who have said they did not sign the nomination papers for Coakley-Rivera, the Democrat who is running against Republican Mare Angelides. The Angelides campaign discovered the irregularities after recently obtaining copies of the nomination papers.

Amore recently debated Galvin and asserted the incumbent “doesn’t answer direct questions.” He added that Galvin is showing “willful ignorance when it benefits his own party.”

Angelides told Reminder Publishing the revelation of the forged signatures has upset people, “especially those whose signatures were forged.” In talking with voters, Angelides said she has heard concern.

Coakley-Rivera in statements to the press has called the issue “a smear campaign” and a “stunt.”

A written statement released by the Angelides campaign said, “These irregularities in nomination papers: signatures same handwriting and numerous nomination papers without clear indication of candidate or town are clear concerns for the integrity of this election.  Therefore, we are asking The Secretary of State to provide for poll watchers in Springfield, Chicopee and Holyoke as they are the largest cities and therefore have the most potential for voter fraud.  Attorney Angelides is also asking the Secretary of State to ask Ms. Oyola, Registrar of Voters in Springfield, to recuse herself from the election process due to numerous irregularities on the nomination sheets in her jurisdiction, including questionable signatures and because of the personal conflict she has as a former assistant to Representative Coakley Rivera.”

Because the time to challenge the signatures has passed, Angelides said, “My recourse is to leave it [the issue] in the hands of the Secretary of State.”

According to Angelides, Galvin said he would refer the matter to the appropriate agency.

Angelides intends to bring up the issue, among others, at the single debate between her and Coakley-Rivera on Nov. 2 at 12:30 p.m. on TV22.