Dakin taking in pets displaced by virus, urging owners to be prepared 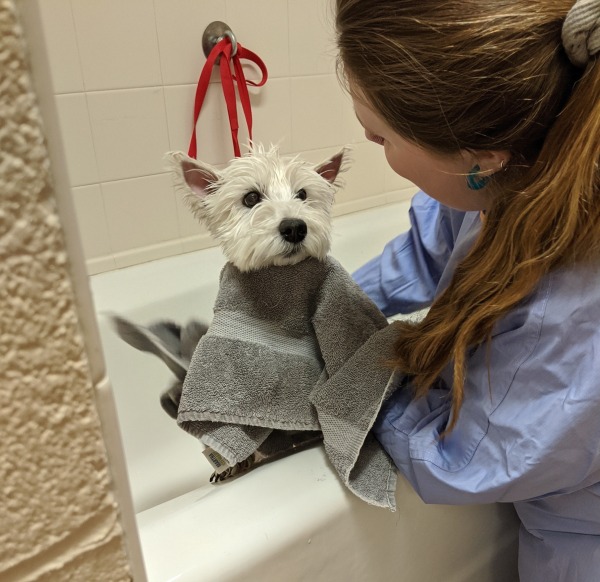 Sampa, whose owner recently passed due to the coronavirus, was taken in by the Dakin Humane Society and recently found a new home.
Reminder Publishing submitted photo

SPRINGFIELD – In recent weeks, the Dakin Humane Society in Springfield has taken in animals whose owners have fallen ill due to the coronavirus. Now, the shelter is urging people to have a plan in place for their pets, should they fall ill as well.

Executive Director Carmine DiCenso said Dakin has always had a program to provide for pets whose owners might be hospitalized or in a domestic violence situation. DiCenso said while the shelter provides temporary shelter and resources for those in particular situations, this program should serve as a “last option.” The program, he said, “aims to keep people and animals together.”

“We’d much rather people keep their animals. The best option for an animal is to be in their house,” he said.

As of April 14, DiCenso said Dakin had taken in a total of six animals whose owners had gotten sick from the coronavirus. One home, however, had multiple animals, he said. While the ultimate goal of the program is to reunite the animal with their owner, DiCenso said the owners of two animals they had taken in had, unfortunately, died of the virus while their pets were in Dakin’s care.

While the research is still varied as to whether pets can be carriers of the coronavirus, DiCenso said the staff at Dakin is taking precautions and recommendations put forth both by the CDC and the American Animal Hospital Associations (AAHA). He said because it’s unknown if pets could be carriers, they’re treating all incoming animals who have been in contact with the virus as though they could be positive.

“Most things point to technically they could carry it on their fur, [but] since we don’t know the best way to approach it is as they are,” he said.

When an animal whose owner has been diagnosed with coronavirus arrives at Dakin, DiCenso said they are placed in isolation for 14 days. During that time, staff are assigned to take care of the animal’s health and enrichment. He said each time staff entered the isolated area with the animal, they “would be wearing protective gear.”

He said while he thinks “it’s probably realistic” that Dakin will end up taking more animals displaced due to the virus, their resources are limited. “There’s only so many we take in,” he said.

DiCenso said one way to notify people that there are pets living in a home in case of an emergency, is to purchase a window sticker that notifies first responders how many pets are living in the home. This, he said, will allow first responders to contact the proper authority such as animal control or Dakin.

DiCenso also emphasized the importance of pets having collars with the proper identification tags, so that they may be returned should they go missing. “It’s not unlikely that an animal could get loose,” he said.

While the ultimate goal is to reunite the pet with their owner, should that not be possible, DiCenso said the animal would either go into a foster home or be placed up for adoption. A small dog named Sampa whose owner had passed away, found a new home on April 15.

DiCenso said the pandemic demonstrates how important animals truly are to people. He described a scenario in which a pet owner had been hospitalized for three days, and when he woke up “his first concern was his dog.”

“The bond between people and animals is so important. Animals are really there to help comfort them,” he said. “Helping animals is helping people.