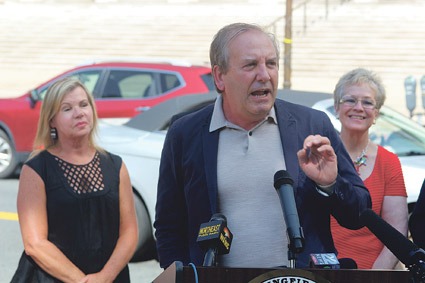 Mark Davy of Futurecity spoke about the potential of “placemaking” in Massachusetts.
Reminder Publications photo by G. Michael Dobbs

SPRINGFIELD – At the end of a day that included a tour of the city and a lengthy workshop Mark Davy expressed that Springfield has “an amazing list of assets.”

Davy is the founder of Future\City, a firm based in Great Britain that brings business, artists and the cultural scene of a city together to revitalize a city. The Massachusetts Cultural Council (MCC) and The Boston Foundation are sponsoring an initiative called “Futurecity\Massachusetts.”

The effort is focused on Boston, Worcester and Springfield and Davy said he has had “a most extraordinary week” touring the state and these three cities. He has undertaken projects in Australia and the United Kingdom and this is his first one in the United States.

Anita Walker, the executive director of the MCC, said the state is taking “a quantum leap” by employing Davy and his team.

What Davy and his team calls “placemaking” have created more than 200 partnerships to “reposition cultural assets from community amenities to marketplace drivers.”

Before taking a tour of the city, Davy said the approach to attract members of the Millennial Generation must be different than those of older generations. He said they are not as interested in “products” as they are in “authentic experiences,” which is what a city should offer them.

After a tour of the city’s Central Cultural District, Davey told Reminder Publications Springfield has an advantage of being “the right size” – a “small city with big ideas.”

The question on which he and his team will spend more than two months working on is how to combine Springfield’s assets together to create a new energy in the city. One question is how to make the city more “walkable,” he said.

Davey said having access to the Connecticut River is important, as a connection to a river has proven successful to other communities.

“There must be a way of creating fingers of availability [to the river],” he said.

He said this is a time of the “return of the artisan – the quality of things being important.”

Also of value is “the intent of the theatricality of a city, the playfulness of a city,” Davy added.

Morgan Drewniany, the executive director of the Springfield Central Cultural District, said what was valuable about the workshop Davy conducted was the opportunity of having “economic development people and cultural people in the same room saying the same thing.”