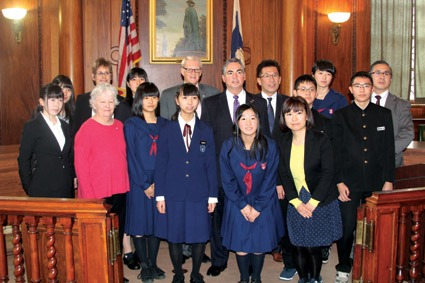 SPRINGFIELD – For the 27th time, a delegation from Springfield’s sister city in Japan – Takikawa – has visited the city and as part of their time here met with Mayor Domenic Sarno in City Hall.

The meeting included a press conference on Nov. 1.

Sarno explained the exchanges started during the administration of Mayor Hurley.

“This continues our tradition of welcoming ‘our neighbors from the East.’ I’m very thankful to the local efforts put forth by Springfield residents Sheila McElwaine and Kathleen Riordan in continuing to orchestrate these visits, which were started by Sue Root when I was an aide during the Mayor Mary Hurley days back in the late 1980’s and early 1990’s,” he said.

Now the group, Springfield Friends of Takikawa, continues the sponsorship of the effort.

Takikawa is a city of about 41,000 people and is located on the northern island of Hokkaido.

During their time in Springfield they went through Forest Park, visited the Basketball Hall of Fame, attended a luncheon at Pizzeria Uno, went to the Lyman and Merrie Wood Museum of Springfield History and then toured Springfield College.

The delegation will be led by Norikazu Mizuguchi, president of the Takikawa International Exchange Program, Kumiko Nomura, English teacher at Takikawa West High School and Yasuhiro Yamauchi, director of the Tourism and International Affairs Department for the city of Takikawa. Yamauchi taught in the Springfield Public Schools in the 1990’s and acted as an interpreter for the group during their visit.

Sarno asked the nine students in the group if they had career plans and several answered in English.

Mizuguchi told Sarno that he “hopes this relationship [between the two cities] will last forever.”

McElwaine, president of Springfield Friends of Takikawa, said, “We hope to organize some visits to Takikawa in the next few years.”