Developer agrees to clean up gravel pile on Boston Road 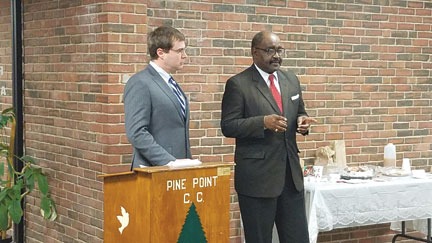 SPRINGFIELD – Residents of the city’s Pine Point neighborhood are hoping that soon a mountain will be made into a molehill.

Graham has been attempting to build 14 market-rate townhouse rental units at the former Russell’s Restaurant site, but his plans have been marred by delays including a long process to gain approval from the Water and Sewer Commission and later a change in the city’s zoning bylaws.

Under the previous zoning, Graham’s project was an acceptable use for the property, but under the new regulations, he is now required to receive a special permit and zoning change in order to move forward. Graham is slated to go before the City Council on Feb. 26 for those and was seeking the PPCC’s blessing beforehand.

Eric Segundo, homeowner of an abutting property on Lamont Street, said Graham should make a good faith gesture and challenged Graham to remove the mound by the start of 2018. Segundo, who noted he didn’t oppose the actual project, said quick action was necessary due to the neighborhood’s lack of trust in Graham after he failed to address the gravel pile after multiple complaints from the community.

“At this point, what I think what we need to hear from you is, ‘I am going to clean this mound in two weeks.’ That’s what I should be hearing and what this council should at least hear from you,” he said. “Before the city even hears your special permit, you should say to us right now, ‘By the end of the year I’ll have the mound clean,’ and then from there figure out what your project is going to be. I think I’ve dealt with enough dirt [while] looking out my window.”

Graham ultimately agreed to that timeline and will appear before the PPCC again on Feb. 13 to review his progress.

The mound in question has been on the site since 2015 and has been a bone of contention among residents and members of the council since its creation. Concerns about the esthetics and the safety of the property have been at the crux of the majority of the discussions with Graham since he acquired the property.

Graham spent the majority of the meeting offering apologies for shortcomings, blaming his own inexperience as a young developer embarking on his first project of this magnitude and offering a timeline explaining the long list of delays in getting the project off the ground.

He admitted fault in not communicating with the PPCC after former President Gloria DiFilipo left the board as well as City Councilor Marcus Williams. He told the PPCC he made the decision to move forward with the lot’s demolition prior to receiving approval from the Water and Sewer Commission, which he also admitted was a mistake, but he kept the gravel on the site because it is slated to be used as the foundation for the development’s new parking lot.

State Rep. Bud Williams and Councilor Williams both also spoke at the meeting calling for the removal of the gravel pile, with the elder Williams threatening action through the city and state if the matter is not resolved.

“One of my main concerns is that the mound of dirt and asphalt and whatever it is on that corner is really embarrassing to Boston Road and to the city of Springfield and to the residents who live in the area and live next door, that is an eyesore; a tremendous eyesore for this community,” Rep. Williams said. “I told Mr. Graham, whatever your plan is, you and the Pine Point Council, you work together to dictate that, but that dirt has to be moved.”

He continued, “I reached out to [Building Commissioner] Steve Desilets from Code Enforcement, I talked to the mayor. I’m prepared to move forward with the city or the state to clean that property, level it, get the dirt out and lien Mr. Graham.”

Councilor Williams echoed the sentiments, pointing out the Williamses hosted a joint press conference at the site on June 1, 2016 and that it has remained unaltered.

Segundo and other residents and council members also criticized the general upkeep of the property, noting tall weeds, trash and poor care of the temporary fence around the property. Many of those issues, they noted, were currently being addressed by neighbors and not by Graham’s contracted property manager, Pine Point Property Management.

“The garbage, the mound, the fencing that flips over every time a big wind storm comes by and it’s tilting and it’s all upside down, that garbage around there, I clean it,” he said. “When I’m cutting my grass I go over and clean it because it’s in my yard.”

PPCC President John Lysak said since exchanging information with Graham at an earlier meeting, the communication regarding the project has been much improved, however, it still needs to be better. He said the fact that Graham planned to use the gravel as the foundation for the new lot was new information the council had not heard before.

“I would have never asked you to get rid of the pile totally because I know fill isn’t cheap,” he said. “If you had told me that, when I spoke to residents, I could at least give them a reason why there was a pile there. But as far as everybody was concerned, there was just a big pile of dirt and asphalt there.”

He also noted the lack of action on issues such as the gravel mound and complaints about the upkeep of the property remain a problem.

“The last council tended to hound people when they were on projects; we’re a little different. I’m willing to work with people, but if we ask for something or address something, we kind of hope it will be done. If we ask somebody about doing something or give them our concerns and I hound you, I know you’re going to do it, but if we tell you and you do it, we know you’re going to be a good neighbor. That’s one of the concerns,” he said. “Half of what I mentioned [at a prior meeting] you did fantastic on. The other half? We hear it from people still.”

Graham’s proposal involves the creation of 14 two-bedroom units he said he hopes to market to young professionals with a monthly rent of around $1,300. During the meeting he noted he previously had received interest from a Springfield College professor and a young family moving into the area due to the acceptance of a two-year contracted position at Baystate Medical Center.

The townhouses would be pre-fabricated modular construction made in Pennsylvania. Graham, the owner of 15 single and multi-family homes in the city, also recently gave members of the council and Reminder Publications a tour of a home he is building with similar construction on Covington Street, less than a half mile from the proposed Boston Road site. The modular units are trucked in in pieces and then placed together with the assistance of a crane, he explained.

The development would also have 34 to 36 parking spaces for the 14 units, which he said exceeds city requirements.

When asked if he plans to subsidize the units, he said he did not have any plans to do so, but would adhere to any laws pertaining thereto.