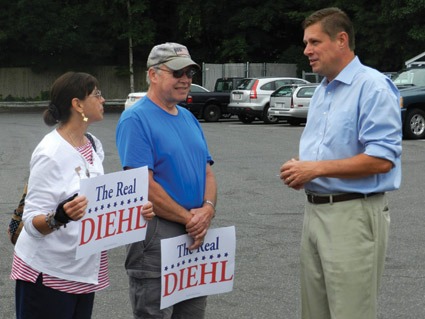 State Rep. Geoff Diehl is seen at his Springfield appearance last week speaking with supporters Debbie Martell of Ludlow and Ken Deso of Springfield. He is running for the Senate against Elizabeth Warren. Reminder Publications photo by G. Michael Dobbs

SPRINGFIELD – It was an unusual choice to present a campaign kick-off event – a gas station on a busy street. State Rep. Geoff Diehl, though, wanted his emphasize his involvement with the successful effort that repealed an automatic increase of the Commonwealth’s gas tax.

Diehl appeared at Welker’s Gulf Station on Allen Street to announce his run for the Senate against incumbent Elizabeth Warren.

The Republican state representative is from Whitman and has served in the House since 2011. He has been involved in an effort to block a pay raise for legislators and to prevent the organizers of a proposed Boston Olympics from being able to use state funds if the Olympics came to Boston.

Diehl was the co-chair of the Massachusetts committee to elect Donald Trump as president.

He believes that having a Republican in the Senate would greatly benefit the Commonwealth at a time when the Republicans control the Congress and the White House.

“Putting the agenda of the people of Massachusetts first is the most important work I can be doing down as your U.S. senator,” Diehl said.

Diehl’s appearance drew about five supporters and about an equal number of Warren supporters who were stationed about a half mile down the street holding signs for her campaign. Diehl has lost no time in criticizing Warren and in a press release issued after his Springfield appearance on Aug. 3 he spoke about the senator’s town meetings he has been conducting.

“She is not holding town hall meetings to interact with her constituents. These are political rallies disguised as town hall meetings. Warren has only been interested in holding ‘town hall meetings’ since she announced her re-election campaign and the WBUR poll numbers showed her upside down,” said Diehl.

Speaking of Warren at his Springfield appearance he said the Commonwealth doesn’t need a senator who is writing books while in office for personal profit and accused Warren of wanting to run for reelection simply to have a platform for a presidential campaign.

He said he has worked in the Legislature to save taxpayers money and added the proposed Boston Olympics could have incurred billions of dollars in over-runs in construction costs that would have been passed along to Massachusetts residents. He believes his efforts in collaborating with former independent gubernatorial candidate Evan Falchuk in a ballot issue to hold taxpayers harmless contributed to the demise of the Olympic effort for Boston.

He said the Boston Olympics would have been “Big Dig number two.”

“I’m the only candidate who can prove he has put money back in people’s wallets,” Diehl said.

Securing the borders of the country and the state is a priority with Diehl who charged that services provided by “sanctuary cities” is draining funding away from other programs including those that help veterans.

He said Massachusetts needs a “jobs senator,” and added, “I’m looking forward to making sure we can grow jobs, help small businesses do better, help them on healthcare costs because obviously that’s hurting them in hiring people.”

Diehl believes his grassroots team that worked on ballot initiatives will carry him though a primary.

Warren has a reported $11 million in campaign funds and Diehl was asked how he was going to overcome those resources. “I think we at an era now when people are looking at well beyond and they are looking for people who go beyond partisan politics to deliver. And that’s the message a grassroots team can help deliver.”

The 15 months until the election in 2018 is seen as an advantage by Diehl as he plans to work every week to secure name recognition and out across his message.

He said if he had been in the Senate when the recent vote on healthcare was taken, he would have support the Republican plan and sent a health insurance bill to a conference committee. He supports legislation that would restore Medicaid block grants to the states that could be used to develop universal healthcare on the state level.

He said Warren is supporting single payer health plan and claimed it was responsible for the recent incident in the United Kingdom in which baby Charlie Gard didn’t receive the healthcare he needed because of the bureaucracy involved. He supports the influence of the free market to decrease healthcare costs.

Diehl said he wants to be a partner with Gov. Charlie Baker in Washington, DC.