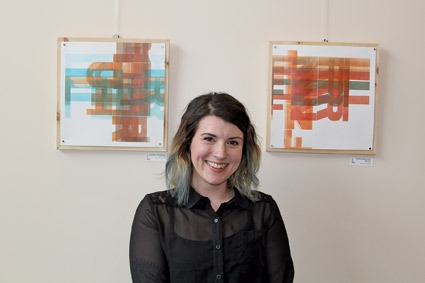 SPRINGFIELD – For a second time, downtown Springfield was the location for “pop-up” art.

On April 5, artists and musicians in three locations participated in Art Stop, a program developed by the Springfield Central Cultural District.

Morgan Drewniany, the executive director of the cultural district, told Reminder Publications that 20 applicants applied for the program, which made this Art Stop “pretty competitive.” This time, she said the participating artists were given a stipend to be part of the program, which increased interest.

The event took place from 4:30 to 6 p.m., a time to attract people who were leaving from work, she explained.

The concept of the Art Stop, Drewniany said, came from downtown building owners, who are interested in having events that both draw people downtown and keep people longer in the area.

This time artist Easter White from Northampton was exhibiting her fabric prints at 1550 Main St. She thought he pop-up gallery idea “was a great opportunity” for her.

Outside of 1550 Main Street, the 3 Light Art Club from the Renaissance School were creating art literally on the sidewalk.

Kat Harrison from Easthampton was at the UMass Springfield offices at Tower Square with a series of prints. She challenged people to guess the source for the multi-color images and explained they are actually dried paint chips collected from used palettes.

Lisa Hersey, also from Easthampton, was in the offices of New England Public Radio, with her prints. Using large type, she created prints that present the letters as shapes as opposed to a symbol with a meaning.

“It’s really awesome not to have it in a gallery space,” she said. “People don’t feel comfortable in traditional galleries.”

Performing at the three locations were The Greys, a jazz duo, violinist Ann Marie-Messbauer and guitarist Kevin Chaffee.