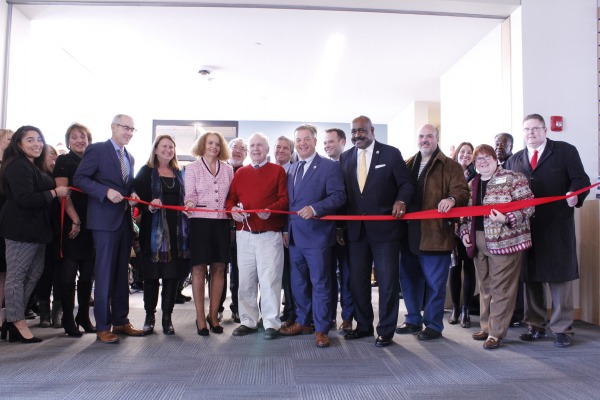 Local and state officials stand with members of the Library Foundation and Commission to officially cut the ribbon and open the East Forest Park Library.
Reminder Publishing photo by Danielle Eaton

SPRINGFIELD – A little over a year after the groundbreaking, on Dec. 19, the East Forest Park Library officially opened its doors to the public for the first time in a brand new building on Surrey Road.

Ground was broken for the library branch in October of 2018. The branch was previously located in a storefront on Island Pond Road.

The official opening of the building began with a mock flag raising ceremony in the lobby, due to the cold weather. The flag pole for the library was purchased and donated by Garvey in honor of her husband, James, who passed away in February of 2019. After a student from Pope Francis Preparatory School sang the national anthem, Garvey was presented with a plaque for both her service and donation to the library.

Following the flag raising ceremony, speakers took turns thanking those who made the library possible and lamenting on what a special day it was, not only for the residents of East Forest Park, but for Springfield.

Myron Hatchet, senior project manager of Capital Assets and Construction, said the building is 17,000 square feet, has shades in the meeting room that electronically come down to help with the cost of air conditioning in the summer, has 3D printers and a maker space. Hatchet described the library as the “most energy-efficient building in the city” and said the “job came in on time, under budget.”

Rep. Williams described the process by which the Surrey Road location was chosen. He said three locations for the library were initially proposed: one on Surrey Road, one on Plumtree Road and one off of South Branch Parkway.

Residents then had the opportunity to vote on which of the locations they preferred during law enforcement’s National Night Out. Williams said the Surrey Road location “unprecedented, had 99.9 percent of the vote.”

The location chosen by the residents, Williams said, was “perfect” and located “in the heart of East Forest Park.”

Cary called the project “a tale of two mayors” as the project started under the administration of former mayor, Charlie Ryan, who was also in attendance. Sarno agreed, stating that he and Ryan “were a tag team” and that it had been “difficult [for people] to say no to two mayors.”

Sarno said that while the city had “$10 to $12 million,” that was “going to multiply in wisdom.” He also commended the “resiliency of the residents of East Forest Park.”

Kibodya, who was at the event on behalf of Neal, echoed this. “This is a room full of people dedicated to their community,” he said as he looked around the room.

Lesser, who described the event as an “emotional day” reflected on how far the neighborhood and the City of Springfield had both come since the June 2011 tornado that wreaked havoc on the city, and destroyed parts of the East Forest Park neighborhood.

“This neighborhood, this city has been through a lot,” he said. He continued, stating that it said a lot about the residents that their “first instinct [after the tornado] was to build a library.”

Lesser also shared how his mother, who grew up with very little in New York, found an escape through books at the public library. “Books allowed her to travel,” he said.

Lesser added, “If one child gets the opportunity my mom got, then all of this is well worth it.”

Puppalo agreed, stating “today is our cherry on top for East Forest Park.” He also stated the day had been “a long time coming” and that “a lot of people were going to grow up here.”

Current President of the Springfield Library Foundation, Pat Markey, was one of the last to speak. “Those who came before us saw the good in the library system and dug into their own pockets,” he said. “Good things don’t just happen, good people make good things happen. People saw this not as an obligation, but as an opportunity.”