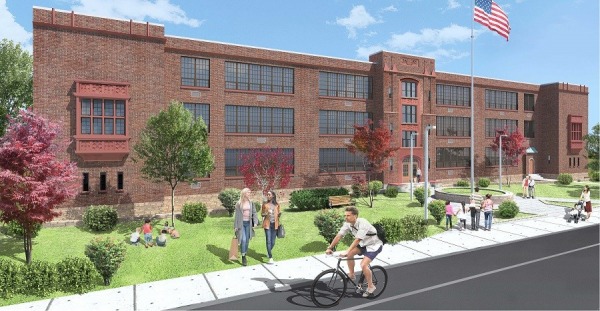 This rendering shows how the new apartments at the former Brookings School will look.
Reminder Publishing submitted photo

SPRINGFIELD – The former Elias Brookings School on Hancock Street will become a 42-unit housing complex with affordable and workforce housing.

The school, first built in 1925, sustained interior damage from the June 1, 2011, tornado and has been vacant since that time. In a tour of the building following the tornado it was visible that the air pressure from the storm bowed some interior brick walls in the school.

Peter Serafino, the director of real estate development for the non-profit Home City Development, Inc. (HCDI), explained to Reminder Publications, “There is really no structural damage.” He noted the city replaced the roof of the building so there is no water damage to the building.

He added construction on the project should start in the first quarter of 2021.

The financing for the project is now in place with an award from Department of Housing and Community Development that includes $1 million of low-income housing tax credits (to generate more than $9 million in equity), $4.4 million of soft debt, and project-based rental vouchers. Other funds for the project include state and federal historic tax credits, City of Springfield HOME and Community Preservation Act funds, and construction and permanent loans.

He said some of the building’s original features will be restored for the new use. The terrazzo floors on all three floors will be restored, the brick will be cleaned, and even some small sculptures that were in the doorways will return.

The school’s gym, which has a stage, will be a prominent feature in the new development. Serafino explained the hardwood floor will be repaired and refinished and it will be used for a variety of events for the tenants and the community.

“We have a really nice resource in that gym,” he noted.

The parking area at the former school will be improved and will accommodate 61 cars, which Serafino said should be adequate for the 42 apartments.

Serafino pointed out the apartments are in a neighborhood that has had many new developments including a restored Ruth Elizabeth Park, a new Brookings School, the roundabout in Six Corners and the on-going Central Street realignment project.

“When we are done this will add to the transformation of the neighborhood,” Serafino said.

Serafino said there will be an application process that will include a lottery for the 35 units for extremely low-income people.

He said the intent was to create a housing complex with a mix of families, single people and couples.

HCDI’s Executive Director Tom Kegelman said in a written statement, “During these difficult times, as Springfield’s tenants’ housing becomes increasingly insecure and the ranks of the homeless grow, we are grateful that we can offer decent, affordable apartments to them and the community in which they belong. We are very grateful to Kate Racer and her team at DHCD for carrying on this important work under very difficult conditions. Thank you to HCDI’s Director of Real Estate Development, Peter Serafino, for carrying this project over the last year, ensuring a strong, and ultimately, winning proposal. And to the countless other people, partners, and teams for their support in helping reach this milestone in the development process. Thank you to Mayor Domenic J. Sarno, Congressman Richard E. Neal, Representative Bud L. Williams, Senator James T. Welch, City Councilor Melvin A. Edwards, the Maple High Six Corners Neighborhood Council and the Old Hill Neighborhood Council, for their assistance in obtaining this funding award.”