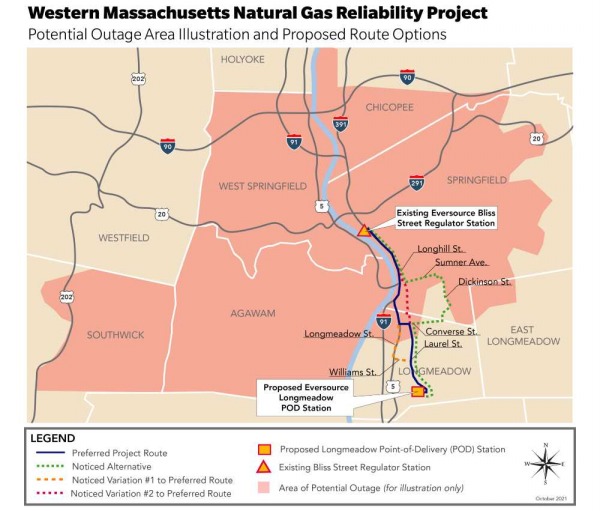 SPRINGFIELD/LONGMEADOW – Eversource Energy introduced a gas reliability project during the latter half of 2021, with the proposed structure potentially adding a new point of delivery system in Longmeadow.

The proposed project would also bring the installation of a steel mainline between the new Longmeadow location and the gas line’s existing regulator station in Springfield, as well as upgrades to the existing gas line connected to an Agawam regulator station. As Eversource presents to the central communities involved, the project is already garnering an array of different perspectives.

Springfield’s Sustainability and Environment Committee heard the first Eversource presentation of the project during an Oct. 14 meeting. Eversource Energy’s Community Relations and Economic Development Specialist Joseph Mitchell showcased a presentation detailing, according to Eversource, the project’s necessity, stressing that the proposed point of delivery system will ensure that residents would not experience service outages if one of the points of delivery systems are affected by extreme weather or other disruptions.

“This is a reliability project, not an expansion project. We want to mitigate the risk in the greater Springfield area,” said Mitchell. Before finalizing the new point of delivery system’s plans, Mitchell presented different deviations of the pipeline’s potential route. Eversource’s shortest and preferred route would cost $22.7 million, while the company’s largest route costs $32.7 million.

In the aftermath of the presentation, Chairman of the Sustainability and Environment Committee and City Councilor At-Large Jesse Lederman expressed his perspective on the project by calling for an Independent Cost/Benefit Analysis from the Massachusetts Department of Public Utilities (DPU). The councilor explained his concerns as a part of his mission to ensure accountability between public utilities and Springfield.

Lederman cited two major reasons for calling for the independent examination. He expressed concern about investing in gas projects as the nation steadily embraces renewable energy sources while also questioning the viability of the proposed point of delivery system as a necessary addition.

“If we know that the benefit is not really there, then I think you’re going to have a strong case for the DPU to push back on this proposal,” said Lederman in an interview with Reminder Publishing. The councilor shared that the reliability project started as a rumor when Columbia Gas worked with the city before being acquired by Eversource in 2020.

Lederman and his City Council colleagues also remain proactive in ensuring Eversource pay their debts to the city, as the company owes roughly $44,000,000 from overdue payments dating back to 2013. “Certainly, I believe Eversource needs to pay their bill,” said Lederman. He said that former Ward 8 Councilor and current state Rep. Orlando Ramos created legislation that will close a loophole that allowed bills to go unpaid.

Despite some concerns, Lederman acknowledges Eversource as a “strong partner” to Springfield, with the organization aiding the city over the years in leaks and repairs. “That’s been a relationship we’ve worked hard to make sure is maintained for the benefit of the people of Springfield, but always with an eye for accountability in mind,” said Lederman.

In response to Lederman’s statements, Eversource Media Relations Manager William Hinkle assured that the project will be undergoing scrupulous review from the Energy Facilities Sitting Board (EFSB) and other state organizations. “The EFSB exists as an independent body to evaluate critical energy and facilities projects,” said Hinkle in an interview with Reminder Publishing.

Hinkle stressed that an open dialogue between the company and local communities remains an essential aspect of the project. So far, Eversource participated in a sit-down with state Rep. Carlos Gonzalez and one with the Longmeadow Select Board, while also hosting two different open house sessions for the public in November.

“With any of our projects, close communication and feedback from our local communities, our customers and other stakeholders is a critical component of that work. We’ve appreciated the opportunity at the early stages of this process to engage with our customers in the Greater Springfield area,” said Hinkle.

The media relations manager expects the project to undergo EFSB review over the next two years, with the most ambitious timeline for the project allowing for construction to begin by 2024.

The Longmeadow Select Board’s concerns echoed those expressed by Lederman. At the board’s Nov. 15 forum on the topic, Chair Marc Strange called the reliability concerns cited by Eversource, “undefined” and “speculative.” At that time, Strange had asked for a third-party risk assessment of the Memorial Bridge’s gas infrastructure.

“For years, we have disputed that Eversource’s backup plan is their only alternative,” Michelle Marantz, chair of the Longmeadow Pipeline Awareness Group, a citizens group opposed to the project. “Let’s remember that a tornado crossed the Memorial Bridge several years ago. In its wake, no damage was done to the Memorial Bridge pipeline – no pipeline repair was requested and no pipeline leaks were reported by the energy companies.

“We assert that any catastrophic event destroying the Memorial Bridge would also take out the vulnerable Bliss Street station on West Columbus Avenue. One can only conclude that this $40 million expansion project is truly a solution in search of a problem,” said Marantz.

Fire Chief John Dearborn has expressed concerns regarding the effect of construction and potentially catastrophic damage near the dam at the Longmeadow Country Club, which has been listed by the Massachusetts Office of Dam Safety as a “significant hazard” posing risk to life and property if a failure were to occur.

Marantz said none of the routes proposed by Eversource are “acceptable.” Any of the four routes would carry gas through “high-pressure pipelines,” along “well-trafficked streets in dense neighborhoods.”

Marantz pointed out potential health and safety risks, such as the 2012 explosion that injured 18 people and damaged 42 buildings in Springfield. There was also a 2018 explosion in the Merrimac Valley, which resulted in one death and 8,000 displaced residents and more than 100 homes suffered fire damage. Less than a year ago, a fire in Marshfield was caused by a downed powerline igniting gas from a main and took hours to shut the main off because a shutoff valve could not be located. A dozen homes needed to be evacuated in the residential neighborhood.

Aside from potential explosions and fires, Marantz said pipelines release carcinogens, chemicals that can cause cancer, at “all points in the delivery process,” including pipeline joints and at metering stations like the one proposed for Shaker Road in Longmeadow. There is some evidence for this assertion in a 2019 study, “Air Emissions from Natural Gas Facilities in New York State” by Pasquale N. Russo and David O. Carpenter, published by the International Journal of Environmental Research and Public Health. In it, data from the 18 New York compressor stations that report to the Environmental Protection Agency showed, “between 2008 and 2014, they released a total of 36.99 million pounds of air pollutants, not including CO2 and methane. This included emissions of 39 chemicals known to be human carcinogens.” This is one reason people have cited the metering station’s proximity to Wolf Swamp Road School as a particular concern.

Concern among residents was so high that they passed a zoning change prohibiting new gas infrastructure at a 2019 Special Town Meeting. Despite this, Eversource is seeking an exception from the state under M.G.L. Chapter 40A that would overrule the zoning bylaw.

Marantz emphasized that the Longmeadow Pipeline Awareness Group’s opposition to the project is not a case of not-in-my-back-yard (NIMBY).

“From the beginning, this has never been just a Longmeadow resistance effort. Our motto has always been, ‘Not in Anybody’s Backyard.’”

She said Longmeadow has worked with Springfield to oppose the project. “All proposed routes travel through Environmental Justice neighborhoods in Springfield before ending at the Bliss Street Regulator Station on Columbus Avenue, thereby violating a tenet of the 2021 Next Gen Roadmap Law.”

The awareness group and Eversource are at stalemate. Marantz said, “there are no assurances that Eversource can possibly make,” to allay resident concerns. On Eversource’s part, Senior Media Relations Specialist Pricilla Ress said the company is “looking forward” to the next steps of the process.

“This will open an approximately two-year regulatory proceeding, as well various local, state and federal permitting processes, and we look forward to that comprehensive public process to consider this critical reliability project and important issues like need, safety, environmental impacts and cost,” Ress stated. “Throughout this process, we remain committed to close collaboration with our neighbors in the local communities and stakeholders at all levels to listen to their feedback – with a constant focus on ensuring safe, reliable service for our customers.”

Despite Ress’s words to the contrary, Marantz said, “At this point, despite our outreach, Eversource does not appear to be listening to our concerns – an unfortunate reality for them – and for us.”