‘Everythang Sauce’ is the start of new business for Springfield couple 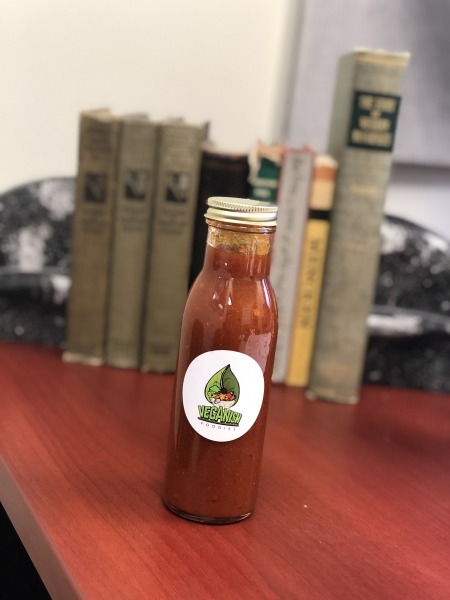 Everythang Sauce is both spicy and sweet.
Reminder Publishing photo by Payton North

SPRINGFIELD – Lamont Stuckey and India Russell have a vision of providing a healthy path to vegan dining and they are hoping to start people on that journey with a sauce – not just any standard condiment, but “Everythang Sauce.”

It’s not catsup, it’s not a barbeque sauce and it’s not just a hot sauce, but also a combination of vegan ingredients that produces a subtly sweet product with a bit of a warm finish.

Stuckey and Russell explained the sauce came out of Russell’s experimentation.  “It’s has a nice balance: sweet and spicy,” she explained.

Although only into the first 150 days of producing and starting to sell the sauce, the two entrepreneurs explained the reaction from those who tried it.

Russell said that people put it on a ”vast range” of food items, including one person who reported even trying it on cereal.

“It’s for everyone and you can use it on everything,” Russell said.

The two have developed a philosophy of eating they have dubbed “veganish.” They explained their approach is to have people move at their own pace toward healthier eating, slowly adding more vegetables and taking away dairy, eggs and meat.

“It’s a play on words focused on a transition period,” Stuckey added. “It’s about trying alternative food without being a vegan or a vegetarian.”

Russell noted, “It’s taking baby steps to better health.” She added, “It’s for people to jump start their journey. You don’t know where the journey will take you. Everyone’s journey is different. You can explore it one meal at a time.”

Stuckey said the target demographic is for younger people – who could start healthier habits – and older people who seek to do things to improve their health and wellbeing.

The ultimate goal is a fleet of food trucks, Stuckey explained. He expressed concerns that in parts of Springfield there are not many healthy food options, especially during the evening.

In addition, they would like to offer catering services in the future.

For now, though, the sale of their signature sauce is the vehicle to raise funds and recognition. The two completed the SPARK program offered in Holyoke for business start-ups.

Although they can produce up to five gallons in their Springfield home, they have made arrangements with Cornucopia at Thorne’s market in Northampton to use that business’ kitchen so larger scale production can take place. The sauce will also be on sale there as well.

They are now lining up farmers’ markets where they will sell the sauce and going through the process of having nutritional standards established so larger scale distribution is possible.

To learn more about the sauce, go to www.facebook.com/veganish.foodie.