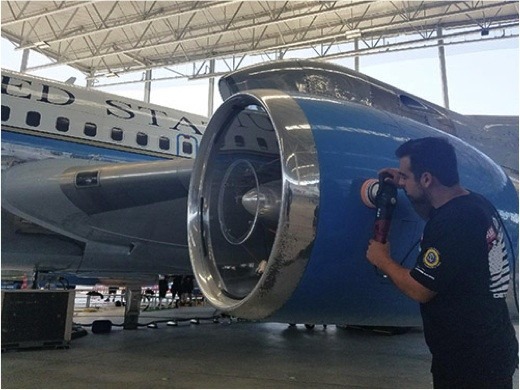 SPRINGFIELD – Each year, a select group of detailers are chosen to be a part of the Air Force One Detailing Team that will travel to the Seattle Museum of Flight in Seattle, Washington to detail over a dozen aircrafts. Paul Frasco, Springfield resident and co-owner of Pro & Local Detailing, has been chosen for the third year to be a part of the team.

Frasco was one of 55 selected from hundreds of detailers by Renny Doyle of Detailing Success. The team began working on July 7 to detail several airplanes including the historic Air Force One. The project will conclude on July 14.

Air Force One is known as the first presidential jet. It is known for flying four American presidents including Dwight D. Eisenhower, John F. Kennedy, Lyndon B. Johnson and Richard Nixon.

Frasco developed a professional relationship with Doyle after participating in an internship in California. “I went to California to train with Renny Doyle and his network. It’s an exclusive training program and once you go through that training program, you’re in the detailers network and they choose members from that group,” Frasco explained.

Participants of the Air Force One Detailing Team volunteer their time each year to detail the Seattle Museum of Flight’s aircrafts.

In addition to Air Force One, Frasco and the team will also be responsible for detailing aircrafts including a World War II B-29 Super Fortress Bomber, a Vietnam-era B-52G Stratofortress Bomber, a Boeing “Jumbo Jet” 747 and a 1960s-70s era Boeing 727-022 commercial airliner. The aircrafts are currently on display at the Seattle Museum of Flight’s new Airpark Pavilion.

“We use different ladders and lifts to clean all of the airplanes at the museum. There are about 18  planes and they all get detailed by us during the week. We wash them for a couple of days and polish the aluminum to bring back the shine. These are outdoor planes and Seattle has a lot of rain, so we help to preserve them. We do 10-hour days for six days,” Frasco explained.

Frasco said that he has had fun being a part of the detailing team. “It’s fun. It’s really cool because there are detailers from around the country like Alaska and Hawaii. You get to know each other. It’s like you’re working with your friends but they’re all professional detailers with their own businesses. We all donate our time. It’s a lot of work but it’s not bad because it’s fun to work with people that you know,” Frasco said.

Frasco told Reminder Publishing that there is anticipation each year as he hopes he is chosen to be a part of the Air Force One Detailing Team. “Every year, you have to wait for the invite. You’re anticipating it and hoping you get chosen again.”

Frasco continued, “It’s cool because it’s the original presidential airplane. It’s a priceless, cool museum piece. We’re 55 detailers who are chosen and it’s cool to be among the 55. It’s definitely exciting and I’m really happy to be a part of it.”