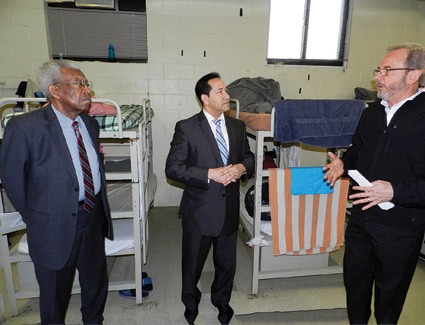 State Representatives Benjamin Swan and Carlos Gonzalez speak to Friends of the Homeless Executive Director Bill Miller during a tour of the facility.
Reminder Publications photo by G. Michael Dobbs

SPRINGFIELD – Members of the Western Massachusetts Legislative Delegation met with Friends of the Homeless (FOH) Executive Director Bill Miller on March 14 to listen to how the region's homeless services are still not receiving the level of funding received by homeless shelters in the Boston area.

State Sens. Donald Humason, Eric Lesser and James Welch as well as state Reps. Aaron Vega, Benjamin Swan, Angelo Puppolo  Jr. and Carlos Gonzalez were at the FOH facility to talk about the current financial situation and strategies pursue to secure adequate funding from the state.

Miller said equity between shelter financing is “something relatively simple,” but the legislators noted the politics involved in the situation are not.

Humason pointed out the development of an equitable formula would undoubtedly mean taking some of the funding from Boston area shelters in order to distribute it to other shelters – an action what would create political reactions.

“They would lose [in Boston] so we could gain in Western Massachusetts,” Humason said.

Puppolo said an increase might “raise the all boats,” but under the current system most of such an increase would still go to Boston shelters.

The Coalition for Homeless Individuals, a statewide organization of homeless shelters, would like to see the current $42 million line item in the budget to be approved raised to $50 million, which would mean a minimum bed rate of $30 instead of $25.

FOH essentially serves Hampden County and Miller noted that three recent homeless men and the shelter tell the story. They range in ages – 29, 59 and 63 – and one is a developmentally delayed man from West Springfield, while another is from Wilbraham and the last one is from Springfield.

“They are all here for different reasons ands present different challenges,” Miller said.

Miller noted that FOH serves 1,000 people a year. One hundred and fifty use the shelter at night at a current state rate of $26 per night. FOH is part of a coalition trying to end homelessness in the area and 20 percent of the people who came to the shelter obtained permanent housing.

FOH is the largest homeless shelter outside of Boston.

The gap between state funding and the cost of the program operated by FOH must be filled with fundraising efforts by the FOH, Miller said.

Without a rate increase, FOH, which provides services 24 hours a day, could decrease its operating time to only from 7 p.m. until 7 a.m. as a means to save money. This would mean that services provided to the homeless to try to get them into treatment programs, permanent housing and jobs programs would be much more difficult to implement.

The fact sheet noted, “We would prefer not to cut but we have to run as a viable business entity.”

Miller stressed the purpose of the FOH is not simply to provide homeless with a bed at night, but rather with opportunities to help end their homelessness.

He noted his goal is no tot get funds to “improve the shelter” because he wants “people to be moving on.”

Miller noted that thanks to the efforts of the collaboration of organizations and city government in Springfield, “not a lot of folks are living outdoors.”

Part of the problem Miller noted is having to re-educate state officials with the change of administrations and appointments about the disparity.

Welch said, “The administration must buy in.”

Miller said one of the other issues is that family homelessness “gets traction” with state officials because of the perception of families being in “crisis.”

Humason suggested directly lobbying officials in the Department of Housing and Community Development about how homeless funds are allocated, while Puppolo was expressed some optimism.

“There are a lot of ways to tackle this,” he said.