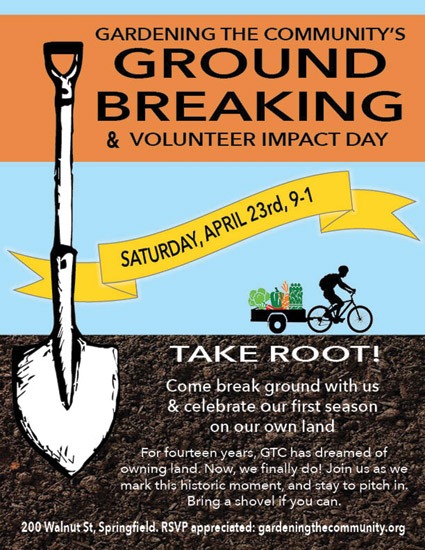 SPRINGFIELD – Spring and gardening season is on the horizon the Gardening the Community (GTC) is preparing not just for a new growing season, but a new chapter in the organization’s life.

The food justice organization has been teaching city residents and youth to grow their own food on a number of abandoned lots in Springfield for more than a decade, but on April 23 from 9 a.m. to 1 p.m. GTC will be celebrating the first permanent garden it owns.

Betsy Corner and Ruby Maddox started GTC in 2002 with a program aimed at city youth learning to grow vegetables, which they sold at in local markets or donated to food shelters.

Kristen Brennan expanded the program in 2005 with the additional focus on sustainable city living by using bicycles and adding rain buckets for irrigation.

Gabriella della Croce, the development associate for GTC, explained to Reminder Publications, GTC will be staging a real groundbreaking as opposed to a ceremonial one and are asking people to bring shovels to help turn over some of the soil at its new location at 200 Walnut St.

Participants are asked to bring water for drinking and to dress according for outdoors work. For planning purposes they are also asking people to RSVP through the GTC’s website at www.gardeningthecommunity.org.

della Croce explained an emphasis of the organization is “improving accessibility to fresh organic food.”

On its new property, GTC will have a new farm stand and is planning to construct a green house, she added. Generally the gardening program is run by 15 to 30 city youth, although della Croce said the total of volunteers involved in the program was close to 300 people last year.

On May 7, GTC will host a plant sale and “gardeners gathering” at 256 Hancock St. The plant sale, which will feature both vegetable and flowers, will be from 9 a.m. to 1 p.m. and there will be free workshops from 10 a.m. to 1 p.m. The event will be rain or shine.

The plants can be pre-ordered on line on the GTC website by April 29. The workshops will cover gardening topics as well as bicycle repairs, soap making and other subjects.

della Croce explained funding for the program comes from foundations and grants as well as individual donations. GTC is undertaking a fundraising campaign called “Take Root.” She said the goal is to raise $15,000. Got a comment about this story?

Go to http://speakout.thereminder.com and let us know.