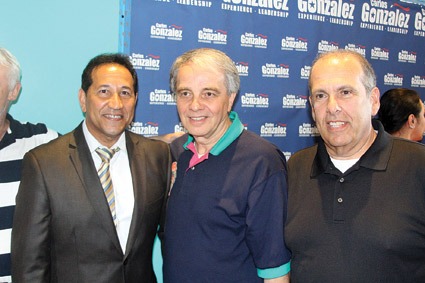 SPRINGFIELD – Although the forecast was for rain and perhaps a thunderstorm, state Rep. Carlos Gonzalez wasn’t worried and joked the weather was not going to stop “the Gonzalez storm."

The turnout at the kick-off of his third run for the House showed that it doesn’t matter that state Rep. Carlos Gonzalez is not on the ballot.

Due to a technical issue, he failed to have enough certified signatures and is running a write-in/sticker campaign.

Although it’s a foregone conclusion that he will win his third term as no one else is vying for the seat, clearly Gonzalez is not taking anything for granted.

At his campaign kick-off on June 28, he demonstrated a wide range of support from House Speaker Robert DeLeo as well as members of the Western Massachusetts legislative delegation and Mayor Domenic Sarno. Several hundred supporters filled the Biergarten on Main Street.

Other supports included business owners in his district such as Rico Danielle of Mom and Rico and Joan Kagen of Square One. Former state Sen. Michael Knapik, who is now Gov. Charlie Baker’s representative in Western Massachusetts, also attended.

There was a long line of people waiting to sign into the kick-off and according to Gonzalez’s Facebook posting after the event, about 500 people attended.

He told Reminder Publications the seat was not his, but a “community seat.”

Gonzalez said that he would like to continue his efforts to address poverty in his district and to extend “opportunities for all” by more economic development projects.

He said the accomplishments made during his two terms so far were not due to one member of the delegation.

“It’s not one person, it’s a united effort,” he said of the delegation.

He noted that raising the state’s minimum wage, reducing crime and improving students’ test scores were due to actions taken by the delegation and the Legislature as a whole.

He explained that when legislators strategize a fight they can get things done.