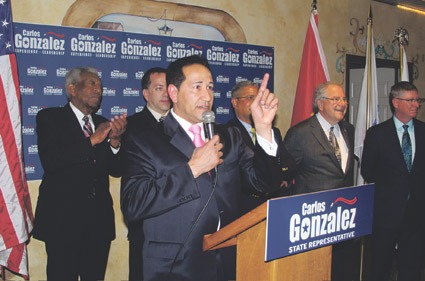 SPRINGFIELD State Rep. Carlos Gonzalez formally started his effort toward reelection on May 5 with an announcement at the International Biergarten in Springfield. The large crowd included many local elected officials, including Gonzalez’s Western Massachusetts colleagues from the House, and candidates for other positions.

Speaker of the House Robert DeLeo cited Gonzalez’s work ethic and “the honesty, sincerity and loyalty he brings to the job.”

DeLeo also noted the importance of the committees on which Gonzalez serves and said, “Carlos is on some very good committees and that was not by accident.”

Gonzalez said that “much has been done in the past 16 months, but there is more to do.” He joked that his goal is to bring half of the state budget to Western Massachusetts, but was serious when he listed his objectives including additional workforce development, prison reform, greater emphasis in education and continuing efforts to address poverty.