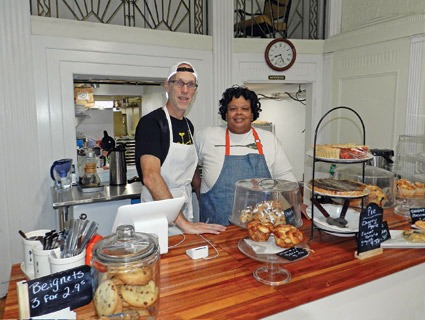 SPRINGFIELD – Sonya Yelder and Todd Crosset are bringing old-fashioned, made from scratch baked goods and sandwiches to a new joint venture in downtown Springfield.

Yelder is known for her Souper Sweet Sandwich Shop in the Forest Park neighborhood of the city, while Crosset is well known for his mobile beignets kitchen, Sidecar Bakery, which appears at street fairs and farmers’ markets.

Granny’s Baking Table at 309 Bridge St. is an artisan baking operation that, according to its website, “continues two baking traditions: American South and North European.”

Yelder said that with her sandwich shop she “wanted to get people out of their comforts zone” by serving “really good sandwiches.”

With the new shop – she is still operating the sandwich shop – “I wanted to do the same thing, only on the pastry side.”

She said for too many people their greatest exposure to baked goods are those “out of a box.” The items offered at Granny’s Baking Table are made in small batches and vary in variety every day.

For instance, they offer an “everything Danish.” It is a savory rather than sweet Danish with the collection of spices one would normally find on an everything bagel, only the pastry is square with a light pastry texture, rather than a chewy bagel texture. In the center is a dollop of cream cheese.

Crossett said, “What we are part of is an artisan food renaissance in downtown Springfield.” He noted that many people are now seeing downtown as a food destination for the “unexpected.”

Yelder said businesses such as this one are vital to the city. “Moms and pops are so important to a city because they offer variety.”

Yelder looked at several locations downtown before settling on the Bridge Street site.

Reminder Publishing’s news staff tried a sampling from the shop, including their signature biscuits, a Danish with Yelder’s pear and Riesling wine filling, a S’More scone, a coconut macaroon and an almond croissant – all of which the staff approved enthusiastically.

A long table for customers to use dominates the bright shop. It offers a communal dining experience. “It’s an opportunity to sit down and talk to one another,” Yelder said. The shop does not offer Wi-Fi. “It’s really about getting to know people,” she added.

For Yelder, the shop is an opportunity to recreates the baked goods she had as a child spending summers with her grandmother in Georgia. Her grandmother made biscuits from scratch every day.

When preparing to open the bakery, Yelder took four months of experimentation to get the taste she remembered. Part of the task included finding a source for the flour her grandmother used, a brand that is not distributed in northern states.

Granny’s Baking Table is open Monday through Friday from 6:30 a.m. to 4 p.m. For more information go to www.grannysbakingtable.com.