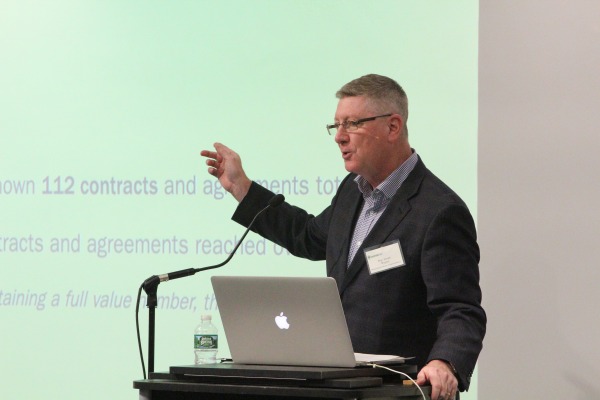 Assistant Majority leader Joseph Wagner spoke at a meeting presenting the services of Greentown Learn to his colleagues in the House and to business people from Western Massachusetts.
Reminder Publishing photo by G. Michael Dobbs

SRRINGFIELD – Legislators from around the area gathered at Valley Venture mentors headquarters to learn about a program that allows inventors to work with manufacturers in the creation of prototypes – a vital part of the process to develop a product.

Greentown Learn, is a non-profit that “helps startups with physical product move from prototype to commercialization with the support and speed needed to realize manufacturing and impact at scale,” according to the organization’s website (www.greentownlearn.org.)

The organization now has an office in Springfield as well as one in Somerville. Among those elected officials attending were State Reps. Michael Finn, Angelo Puppolo and Aaron Vega.

Executive Director Laura Teicher explained that manufacturing has “unique challenges” not the least of which there is considerable investment up front in the development of a product as well as “ along, way to market.”

The goal of her organization is to connect people with product ideas to manufacturers that can create the prototype “to insure readiness for production.”

Since Greentown Learn has started the program in 2016, there have been more than 1,000 connections between start-ups and manufacturers that have resulted in more than 100 contracts. In turn those contracts have helped more than 30 products to market.

State Rep. Joseph Wagner of Chicopee, who serves as the Assistant Majority Leader in the House, said the service Greentown Learn provides a link between companies developing products in the greater Boston area to the “vibrant precision manufacturing” sector here in Western Massachusetts.

He said that he was not “knocking the east-west rail” proposal but “there are other ways to connect east and west everyday.” Wagner believes this program assists in building those relationships.

He noted that Greentown Learn is only one of two such programs in the country, the other being in California.

Rick Sullivan, the president of the Economic Development Corporation of Western Massachusetts, said that while there are more companies developing products in the greater Boston area those firms come here for the creation of prototypes. The connections made by Greentown Learn “allows Western Massachusetts to show what they can do,” he explained.

Dan White, the co-founder and president of Clean Crop Technologies in Chesterfield, has been working on a system that would solve a food production problem in Africa where many grains become contaminated with aflatoxin, preventing their sale and export.

White said Greentown Learn helped connect them with electrical engineering services that will allow them to finish a prototype. He said he expects to make the system available for sale in 2021.

For more information, go to http://greentownlearn.org.