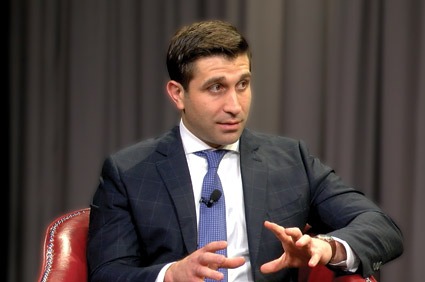 SPRINGFIELD – Hampden County District Attorney (DA) Anthony Gulluni said that while he is still  “very concerned” about the state funding for his office in the new budget cycle, he is “hopeful and optimistic.”

He cited support from the county’s legislative delegation and from House Speaker Robert DeLeo and he said they acknowledge that Hampden County’s courts are the busiest in the Commonwealth.

Despite the crush of cases, the Hampden County District Attorney’s Office is funded fifth among 11 districts, Gulluni said during an interview with this reporter over FOCUS Springfield.

His staff of prosecutors is about half of that of Suffolk and Middlesex counties, something he called a “glaring unfairness.”

The result so far is about an 8 percent increase in the latest version of the House budget, which Gulluni said would go to adding more staff.

He called the increase “significant,” but doesn’t quite rectify the situation.

The Senate version of the budget did not address an increase, but an amendment sponsored by state Sens. James Welch and Eric Lesser to the budget has the budget hike.

The demands of the opioid crisis have increased the workload in the DA’s office, Gulluni said.

The opioid issue was front and center in many of the political races during the last election cycle and Gulluni provided an update on what has happened since.

“I think we’ve made some significant strides in some places, but with that said this is still an epidemic,” Gulluni said.

The number of overdoses has been steady with last year so far, he added.

Gullini said  he has worked to  change the public’s perception of addiction as a “moral failing.”

“What we know, what science tells us is it’s a disease,” he added.

“The majority of my time is dedicated to this issue in some shape, form or fashion,” he said.

He said on the supply side his office continues to enforce the law as vigorously as possible. On the addicts’ side, he is trying to get them the help that they need and deserve. Part of that assistance is the formation about six months ago of a drug court, which can take addicts who come into the justice system with “relatively minor crimes” out of the regular courts. The judges and prosecutors work not just to address the crimes involved, but to get the accused the help they need.

A year ago he formed the Hampden County Addiction Task Force, which meets monthly. Right now, he said the group is analyzing data to see where overdoses are taking place and addressing it.

Educating young people is also a big component of what the DA is doing, he added.

Gulluni readily admitted he was not in favor of the legalization of recreational marijuana. “It’s obviously an unpopular opinion,” he said.

While Gulluni does not necessary see marijuana as a “gateway drug” as some people do, he said, “There’s no question when you look at studies at the way marijuana affects the brains, particularly the developing brain – kids from 13, 14 all the way up to 21, 22 – when the brain continues to develop, it affects the chemistry of the brain and leads to a propensity to addictions to other substances. That is settled science.”

The DA said that he is not necessarily against marijuana, he is concerned about it being characterized as a harmless substance, especially when that message is directed at young people.

One issue for law enforcement is there is no test to determine if a driver is impaired under the influence of marijuana, Gulluni noted. “Unlike alcohol you can’t read a level of marijuana in someone’s system,” he said.

He said the lack of standards and the lack of way to determine impairment is a national problem, not just one for the Commonwealth.

One challenge of the future will be what, if any, negative impact MGM Springfield will have on the DA’s office “I’m concerned but it’s my job to be concerned about these kind of things,” Gulluni said. “I’m optimistic about a positive impact foremost over anything else,” he added. Gulluni believes the influx of new jobs into the city will help people.

He acknowledged there could be problems just with the sheer number of people predicted to visit the casino combined with gambling and alcohol, but should be “limited.”