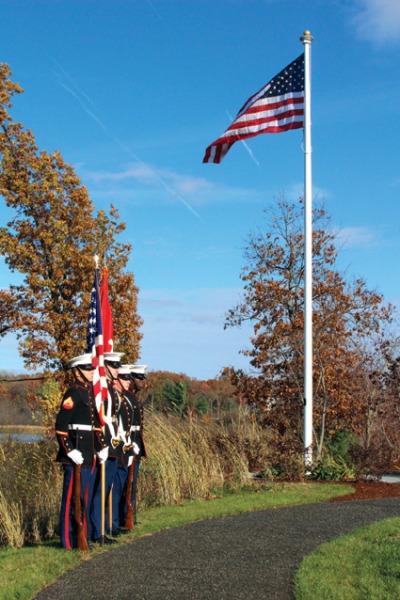 Scenes from the dedication of the park included Marines raising the American flag over the park during the dedication ceremonies.
Reminder Publications photos by G. Michael Dobbs

There were both tears and laughter at the event on Nov. 9 recognizing the life of the Springfield native and Marine who sacrificed his life while helping others during an attack on a Naval Reserve Center in Chattanooga, TN, on July 16, 2015.

Sarno said Sullivan “never forgot his Springfield roots “ and the park “turned a tragic moment into a positive legacy.”

Sullivan was a Cathedral High School graduated and earned a bachelor’s degree in Criminal Justice from American Military University. He was in the Marine Corps for 18 years and had served in Iraq where he was awarded, among other citations, the Purple Heart.

Friends and members of the Sullivan family as well as elected officials, gathered at the new park on South Branch Parkway. The park includes walking paths along the water as well as a pavilion.

As Joseph Sullivan, Thomas’ brother noted, it was an area the two played in as boys growing up in the neighborhood.

The new park cost $695,000 to create with the city allocating $250,000, the state donating $400,000 and $45,000 coming from private donations, Patrick Sullivan, the city’s executive director of Parks, Buildings and Recreation Management explained to Reminder Publications.

During the ceremony, a representative of Congressman Richard Neal family presented the Sullivan family with a flag that flew over the capitol in his honor. A Marine honor guard than raised the flag then raised the flag at the park.

Patrick Sullivan noted to the family, “Your love has inspired the great design of this park.”

Joseph Sullivan said of his brother’s heroism that his “actions showed he had that warrior’s heart needed as a Marine.”

He added with a laugh that his brother “enjoyed life to an immature level. At age 40 he still collected comics [books].”

Recalling his own childhood playing with Thomas where the park is now located, Joseph added, “This is a place to push your little brother into the water.”