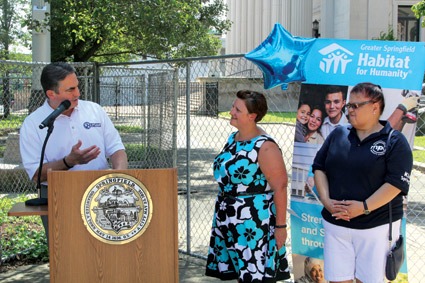 SPRINGFIELD – The help that two homeowners received from Greater Springfield Habitat for Humanity (GSHFH) made a real difference in their lives.

Kim Rivera recalled how she had been homeless before her involvement with the group.

“Thank you so much from the bottom of my heart as without you I wouldn’t be a home owner,” she said at the ceremony on July 21 marking the 30th anniversary of the organization in the area.

Sarno read a proclamation he issued and State Sen. James Welch read one from the state Senate.

GSHFH was founded in Springfield by 13 people in 1987, Jennifer Schimmel, its executive director explained. The organization has helped create housing for more than 82 families as well as 62 families through home ownership opportunities and 20 families through its program “A Brush with Kindness.” In addition the Springfield-based chapter has served more than 90 families in Guatemala.

According to the organization’s website, Habitat partner families are selected based on three specific criteria: ability to pay a zero-percent interest mortgage; need for simple, decent shelter; and willingness to partner with the organization, sponsors and community volunteers.

Schimmel said, “It is an amazing honor to be part of these families.”

Alvin Brown recalled how his life has changed since his involvement with GSHFH 14 years ago. He noted that he has not just a home, but also a place for a garden and a backyard that served as the location for the graduation party for his youngest daughter. Brown added that as a homeowner he has learned how to fix things around his house that he never knew before.

“I have been blessed to have been part of this program,” he said.

For more information, go to www.habitatspringfield.org.